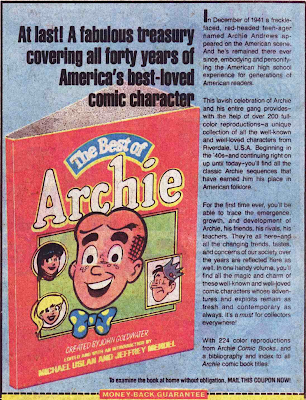 Here's an ad for the ARCHIE collection that came out back in 1981. I bought a used copy a couple of decades later and was surprised to find it autographed by my friend Bob Hastings who had played Archie on radio. What I find most interesting about this ad, however, is that it was co-edited and compiled by Michael Uslan. Mister Uslan was one of the first to offer classes on comics history and he has gone on to produce various superhero films including the BATMAN franchise starting with Michael Keaton. More recently, though, he's back at Archie where he wrote the recent wedding stories and is now, according to reports, getting ready to introduce the concept of death into the Archieverse!
Posted by Booksteve at 8:43 AM