The Films of Ronald Reagan 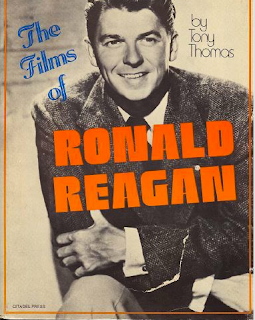 It's long past time for yet another book off the shelf here at the Library. This is one I picked up at a Library Used Book Sale some years back for 5o cents. That just goes to show the unimportance time has allotted to Ronald Reagan's film career.
When I was a kid, Ronald Reagan was still doing 20 Mule Team Borax commercials. As I grew older he became a punchline as the right wing actor who thought he could succeed in politics in a left wing world! Then, later on, people stopped laughing when Mr. Reagan emerged handily as the 40th President of the United States of America. Love him or hate him for his politics, one has to admit that he sure could look presidential when he wanted to do so!
The problem with all of the above is that Ronald Reagan's long career as an actor gets pushed into the background. Understandable, I suppose but you know what? He really wasn't that bad! An affable presence in scores of films both in character parts and leading roles, Reagan's career is hampered by the fact that the outlandish distractions of BEDTIME FOR BONZO and THAT HAGEN GIRL somehow trump the superior performances of KINGS ROW and KNUTE ROCKNE, ALL-AMERICAN.
All of that and the rest of Mr. Reagan's acting career are dutifully chronicled here by Tony Thomas, not the most probing writer but always good for a solid, straight-forward career retrospective. As usual in the pre-IMDB world, the Citadel Press books were indispensable for the film buff...or in this case also the political buff looking for background on a man who became one of the most controversial presidents of his century!
Posted by Booksteve at 4:05 PM