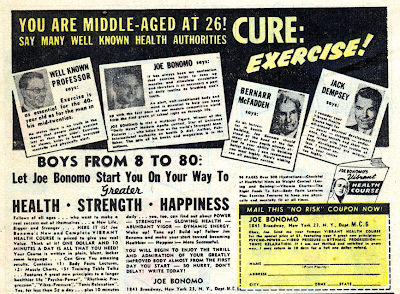 Bernarr MacFadden—whose “stage” name is here misspelled under its original form—was a controversial fitness guru and magazine publisher from the late nineteenth century who was already in his eighties by the time this ad ran!

Jack Dempsey was a former championship boxer already in his late fifties and destined to live nearly three more decades before apparently dying, according to Wikipedia, of an amphetamine overdose.

Joe Bonomo was the guy whose products this ad was pushing in the first place. Hardly the most reliable “expert.” He had been an actor and stunt man before following in the footsteps of his friend Charles Atlas in pushing body-building and health in mail order books and courses. He lived into his seventies.

Finally, this one should be the giveaway not to put too much stock in this ad. The last “expert” is…”Well known Professor!” Seriously. That’s it. There’s a picture. Or rather what looks to be an illustration of a man in glasses (naturally. He’s a professor. Get it?)

So maybe they were wrong. Maybe I’ll still be here come February. Check back and see.