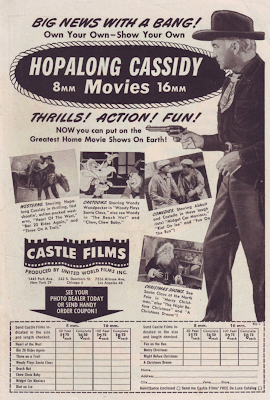 Castle Films are pure nostalgia for so many people of my age but not for me. We never had a movie projector of any kind other than my Kenner Give-A-Show projector in the mid-sixties. Basically, Castle Films marketed home movies on 8MM or 16MM. Sometimes they were shorts or cartoons but often they were abridged versions of feature films, sometimes going back decades! Here from 1950 we have the premiere appearance of old Hopalong Cassidy films for home use, just in time to cash in on Hoppy's newfound popularity on television!
Posted by Booksteve at 8:21 AM