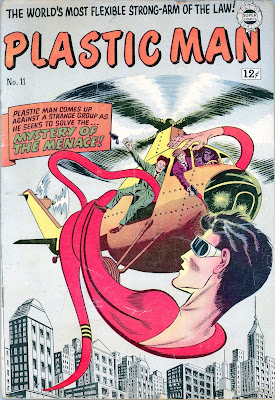 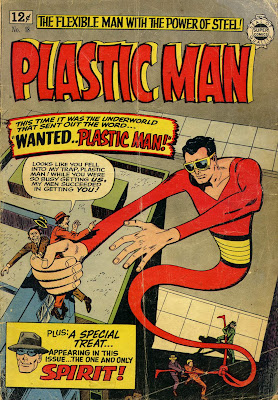 Most old-time comics fans know the story of IW/Super Comics. A man named Israel Waldman bought the printing plates to a whole big bunch of 1940's and 1950's comic books at some point late in the latter decade. For some reason, in those less enlightened times, this gave this otherwise intelligent man the impression that he somehow had the rights to publish these comic books! He had new covers made up (usually by Ross Andru and Mike Esposito although the first one here is by Jack Abel) and made up titles and numbering. Then he set about selling "his" non-dated comics in non-traditional markets, often three in a bag.
Most of the comics were not all that interesting, really, even the first time. Some exceptions were two issues of THE SPIRIT and two issues of PLASTIC MAN that came out just a few years after the original Quality run's end in 1956 and not long before DC revived the character in their DIAL H FOR HERO series in 1966. In fact, one story I've heard indicates that the reason DC chose that point to revive Plas, a character they had bought from Quality, was to reaffirm their existing trademark to the character.
Waldman either ran out of plates or just gave up the IW/Super line soon afterwards. He would resurface about a decade later when he and Marvel vet Sol Brodsky set up a brand new comics company called Skywald. BrodSKY/WALDman. Get it? This time all of their stuff was brand new at least.
Posted by Booksteve at 6:46 PM