Movies That Fell Through the Cracks # 61 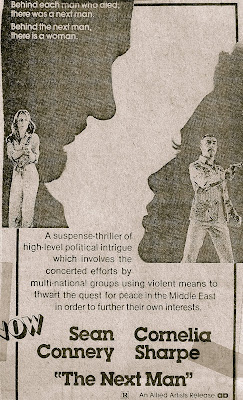 Has it really been five months since we've done a MOVIES THAT FELL THROUGH THE CRACKS? Wow. Sorry. Next time, tell me!
Anyway, this one is definitely a non-starter. THE NEXT MAN came out in 1976, a year before STAR WARS, when the film industry was still desperately trying to find "the next big thing" amidst diminishing box office receipts. Star Sean Connery had finally had success besting his 007 typecasting and was now doing A-List films such as THE MAN WHO WOULD BE KING and ROBIN AND MARIAN with nary a mention of Bond in the reviews anymore. Then , for some reason, he chose to do THE NEXT MAN. This was a decidedly B-list spy film (the type of thing you'd think Connery would avoid) c0-written and directed by Richard Sarafian, best known for years of TV westerns. Another co-writer, the award-winning Morton S. Fine, was associated with TV spy dramas including I SPY! The whole thing was based on a story by Alan Trustman who had written Steve McQueen's BULLITT and THE THOMAS CROWN AFFAIR. Producer Martin Bregman is associated with hit Al Pacino pictures including SERPICO, DOG DAY AFTERNOON and later SCARFACE.
Sounds pretty good so far. But what's it about? THE NEXT MAN--Not the most descriptive title in the history of films. Well let's look at the ad, shall we? Ooooookay. That tells us...what? Another tag line used in the film's marketing was, "In the world of spying and dying, love is the ultimate weapon." Doesn't help much either.
If I may quote IMDB's summary as written by one John Barnes, "Khalil is an Arab diplomat who wants to not only make peace with Israel, but admit the Jewish state as a member of OPEC. This instantly makes him a target for a series of ingeniously conceived assassination attempts, most of which he foils with the aid of his friend Hamid and his girlfriend Nicole. But can he trust even them?"
Ah, I see now. OPEC and the Middle Eastern Crisis were in the news daily in those days. This was supposed to cash in on the interest and fears the public had. Gotcha. And the great Scotsman Connery as an Arab....sure...right. he's an actor. He can do it. AHEM.
Supporting cast included a huge bunch of folks I guarantee you've never heard of as well as character actors Charles Cioffi, Albert Paulsen (who I always thought was Pat's brother) and, of all people, Adolfo Celi. Celi, was, of course, the villainous Emilio Largo in the James Bond classic THUNDERBALL a decade earlier. Remember, Connery was absolutely adamant during this period that he wanted to get away from his association with the 007 films! What were they thinking? Not only that but according to IMDB, Celi, like GOLDFINGER's Gert Frobe, had such a thick accent and bad command of English that you had to hire a different actor to dub him in most of his English language pictures!
Then there was Cornelia Sharpe. Trotted out in the press as the flavor of the month, this former fashion model had only done a few small roles prior to her co-starring billing here as a seductive assassin. She is pretty but dull and the simplest lines were not easy for her to get through. The hype played up her steamy onscreen romance with Connery but it was weirdly Connery steaming by himself for the most part. After this, Ms. Sharpe, as with many fashion models who attempt to act, faded after failing to carry the starring roles in a few TV movies. Her minor attempt at a comeback in the 21st Century involved choosing a role in Eddie Murphy's barely released ADVENTURES OF PLUTO NASH!
All in all, THE NEXT MAN, for all of its "torn from the headlines" background, wasn't so much a bad movie as simply a dull and ultimately pointless one. Director Sarafian, who gave himself a cameo here, more or less gave up directing to become an actor. Sean Connery, in spite of one last return to Bondage in the next decade, became recognized as a cinematic treasure in spite of films like...THE NEXT MAN.
Posted by Booksteve at 3:47 PM