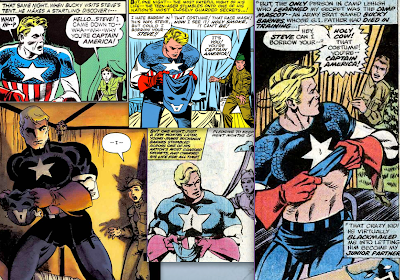 I was shocked and appalled when they decided to bring back Captain America's WWII era partner, Bucky...again...only this time for real! So much of Cap's self was tied up in the fact that he assumed the blame for Bucky's death. Survivor's guilt if you will. All those years of angst, nightmares, false hope, fake Buckys and even trying to "replace" Bucky with Rick Jones made Captain America the man he is. And then they go and bring Bucky back! And guess what? They do it well! Not sure whose idea it was initially but credit for pulling it off seems to lie fully with writer Ed Brubaker. If you haven't been reading Cap comics in recent years (and many may have quit when they "killed off" Cap) let me say I find them to be THE best mainstream comics currently being published. If you haven't been reading them you may not realize that Bucky is, in fact, now Captain America himself! And again, it works! Thank you, Mister Brubaker!
Posted by Booksteve at 5:38 PM