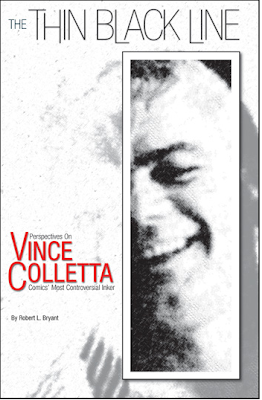 In comics these days, everyone has his fans and everyone has his detractors. Somebody with an absolute TON of each is Vince Colletta, the late inker who was and is arguably the most polarizing artist in the history of comics.
Colletta-bashing has practically become an Internet meme but now comes Robert L. Bryant's new volume, THE THIN BLACK LINE, subtitled "Perspectives On Vince Colletta, Comics' Most Controversial Inker." With the help of such bystanders as Bob McLeod, Mark Evanier and Colletta's own son, we are shown two distinct ways to look at the man's work.
One--He was a true hack, dedicated only to making as much money as he could in comics by inking more and more pages faster than anyone...even if that meant simply erasing or blacking out large portions of the work.
Two--He was one of the most reliable artists in comics--always available for more work and always turning it in on deadline so the material would be on time. If it was running late, they'd call Vinnie.
The truth of the matter, of course, is that he was a little of both. At his best, his subtle line and softening inks made a bad pencil job look good. Equally, when rushed for an approaching deadline, he could cause amazing comics art to become dull and lifeless.
The book also introduces us to the man himself, a larger than life figure who propagated his own legend whilst holding court and building a wonderful, huge home with the profits of his comics work. As with his inking, he was revered by some in real life and reviled by others. Fred Hembeck claims nearly to have lost his very LIFE due to Colletta's negative reaction to his portfolio! To some like Rich Buckler, he was a mentor. To others like Gil Kane, he was a metaphorical destroyer of art by more talented artists.
THE THIN BLACK LINE is filled with examples of Colletta's work both good and bad. There's an absolutely amazing panel from Jack Kirby's IN THE DAYS OF THE MOB where the inker so notorious for silhouetting background characters (if not taking them out all together) has lovingly inked more than a score of small figures. Many other examples show an artist who truly adds to the penciler's work. By contrast, all the usual suspects as far as Colletta panels are also collected here.
There's debate, too, Colletta's long-running collaboration with Kirby on THOR at Marvel and Jack's 4th World titles at DC. Me. I have always fallen into the category of liking--no LOVING-- that combination of artist/inker on those titles. To me, Vince brought Kirby a much needed softening effect, especially by the time they were at DC. By contrast, Kirby's hand-picked inker, Mike Royer, although a fine artist in his own right, so slavishly covered Jack's stylized pencil art that everything and everybody looked to me like they were made out of metal.
THE THIN BLACK LINE is, itself, rather a thin book but it's nicely illustrated, informative and for the old time comics fan a fun if frustrating read. It probably won't change anybody's mind about Vince Colletta but at least it gives you enough info to make up your own mind. As I said, it isn't really the cut and dried situation it seems...but it certainly makes for an interesting read.
Special thanks to Twomorrows for providing me with a review copy. You can get yours now from Amazon.