Well! Reflections on the Life and Career of Jack Benny 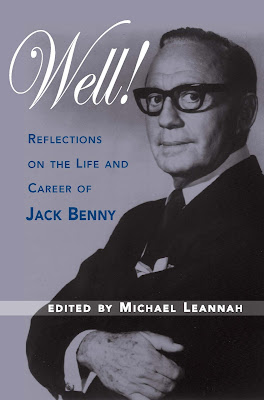 My second book is finally out! MY book, I say. Well, eight pages of it are mine. That beats the seven pages in my first book! Mike Leannah’s WELL! REFLECTIONS ON THE LIFE AND CARRER OF JACK BENNY is from Ben Ohmart’s Bear Manor and offers a look at legendary comedian Jack Benny from a number of different angles—some rather obtuse—by a number of different writers.
Why Jack Benny? Jack Benny taken by himself wasn’t really all that funny and I say that as one of his biggest fans. Jack Benny taken in context, however, was one of the most brilliant comedians and performers who ever lived! THE JACK BENNY SHOW in all of its various forms and formats was in actuality the world’s longest running gag. Jack Benny in 1950 or in 1967 or even in 1974 could get laughs simply because the audiences came pre-loaded with the facts that he was vain, miserly, a bad violin player, walked funny, had familiar expressions, was perpetually 39 years old and had made a notoriously bad (supposedly) movie in 1946. Jack was still getting people asking him about the long-missing gas man in the seventies! It didn’t even matter that this was the CHARACTER Jack Benny and not the real man. The line had long since blurred for most people. It was the facets of Jack’s career that made him funny.
WELL! offers a look at Jack’s career through a number of these facets. While the book could easily have been twice as big, what’s here is a choice selection of articles, ads and rare photos. Even my 1933 Benny Show autograph cards showcased previously here at the Library appear.
Amongst the authors are Frank Bresee, himself a bit of a radio legend, and our own ace researcher Derek Tague who, in collaboration with DRAGNET expert Michael Hayde offers up a nifty piece on Benny’s appearances and caricatures in cartoons throughout the decades. Wouldn’t you know that my own humble contribution would have to follow them! My own piece takes a look at Jack’s reappearance in Batton Lash’s wonderful WOLFF AND BYRD—COUNSELORS OF THE MACABRE.
Other contributors discuss the comic stylings of Mary Livingstone, the genius of Mel Blanc, Jack’s feud with Fred Allen, his friendship with Johnny Carson, classic bloopers, Vaudeville, Hollywood and even his hometown of Waukegan, Illinois. There are even a couple of reprinted articles credited to Benny himself! I say "credited" because they were just as likely ghostwritten by one or more of his regular writers as Bob Hope’s bylined pieces usually were. On the other hand, Groucho is known to have written his own so…
If there’s a flaw to WELL! (other than the fact that it isn’t twice as thick with more pieces on Rochester, George Burns, Jack’s TV specials and his late period violin concerts, etc, etc) it would be the lack of a section telling the reader just who its writers are and how we came to be so affected by a comedian who died more than thirty years ago now. Also, the lack of pieces by Laura Leff, Karen Hughes and even Jack and Mary’s daughter, Joan. Otherwise, from its absolutely perfect cover shot to its list of recommended reading, this book is a treat for Jack Benny fans old and new if I do say so myself! You can order it from Amazon or directly from the publisher at:BearManor Media. I'm going to go send a freebie to Batton Lash for allowing me to interview him and the book to reprint bits from his story. A very public "thank you," sir! Your book is (or soon will be) in the mail.
Posted by Booksteve at 9:39 AM