Song of the South 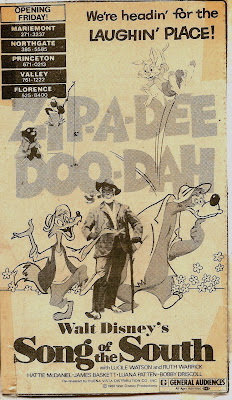 Here’s something that hasn’t been seen in awhile—a newspaper ad for Walt Disney’s SONG OF THE SOUTH…in a theater!!! As you probably know, Disney has (at least in the US) vilified and distanced itself from this film, leaving those who’ve never seen it to presume some sort of major racist issue on the part of the Mouse. If, however, you HAVE had the pleasure of seeing this delightful 1946 combination of live-action and classic animation, you know that it’s no more racist than GONE WITH THE WIND or other period pictures set in the early South. In fact, many contemporary 1940’s films depict African-Americans in much more derogatory ways than this one—usually for supposed comic effect.
The story itself is a mild family story about a boy who gets moved to a family plantation and tries to fit in. As played marvelously by the ultimately tragic Bobby Driscoll (Can you discuss Bobby at all without using the word "tragic?") who was also the voice of PETER PAN, the film is genuinely heartwarming. On this post-Civil War plantation, the boy meets Old Uncle Remus who tells him magical (animated) stories about Br’er Rabbit and Br’er Bear and Br’er Fox. Throughout the whole thing are some good songs including the legendary "Zip-A-Dee-Doo-Dah."
Some years ago, I picked up the Japanese VHS edition in English but with Japanese subtitles. Apparently, Disney has no qualms about releasing SONG OF THE SOUTH everywhere else in the world. The next day at work, I was humming "Zip-A-Dee-Doo-Dah" all day. I asked just about every person of color who came into my store that day if they’d ever seen the film and if they were, in fact, offended by it. Upon hearing the question, many started singing "Zip-A-Dee-Doo-Dah" themselves. Three women offered me money to dub them off copies! The suggestion has been made that Disney release the picture with one of Leonard Maltin’s patented "historical context" apologies as seen on the LOONEY TUNES and POPEYE collections. This would certainly cover their Mousy butts. Let’s hope that enough folks at Disney actually watch the picture and see that it’s nowhere near as bad as they think it is. Every once in awhile, a rumored release is mentioned. Here’s a site with more info AND a way that you can help bring about such a release:Song of the South - Frequently Asked Questions
Posted by Booksteve at 8:51 AM