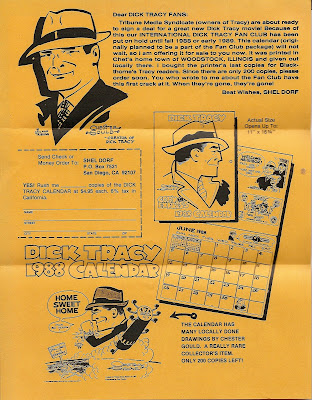 The other day I saw volume two of THE COMPLETE DICK TRACY in a store and was reminded that, strangely enough, the 1980's were a golden age for DICK TRACY fans! This was due, in large part, to San Diego Con founder Shel Dorf who edited Blackthorne's DICK TRACY reprint comics. My dad had been a huge Tracy fan since the 1930's and he devoured these during the eighties in all of their various formats! Blackthorne had risen from the ashes of Pacific Comics, one of the first major independent comics companies. In their new incarnation, their product was sadly not always of the best quality. They did, however, offer a number of classic newspaper strip reprints at a time when few companies were doing so. Mr. Dorf oversaw the Tracys and they were not complete but edited so as to eliminate the repetitive panels that often filled daily story/adventure strips. The completist in me hated that aspect but at the same time, it was smartly done to make the stories much more readable. And what garish stories they were! EC had nothing on Chester Gould at his peak! Toward the end of the decade, with books coming out on the strip and other companies reprinting different eras, the venerable strip (still being written by Max Collins and drawn by Dick Locher at that point) had reached a surprising new peak in popularity. Dorf began making plans for a new Dick Tracy fan club and invited folks to write and be put on a mailing list for when it finally appeared. Then one day, this ad arrived instead. The club had to be put on hold (did it ever surface?) due to Warren Beatty's then still to be made feature film. Instead, though, we were offered this nifty looking 1988 calendar! For some reason, I never got one but even now, as we approach calendar-buying season again twenty years later, I WANT ONE!!
Posted by Booksteve at 11:52 AM