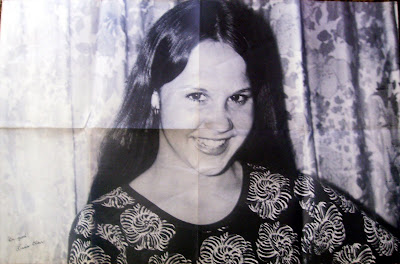 Although it opened in late 1973, I didn't even see THE EXORCIST until well into 1974. By that time, however, I was already enamored of its star and tried to catch her every television interview. There's nothing like a teenage geek when it comes to obsessing. I would haunt the mag stands for everything from SEVENTEEN to PARIS MATCH if it had Linda on the cover. I even joined her supposedly official fan club and seen here is the free poster you got for joining. In fact, it was the ONLY thing I ever got

for joining! While the front offers a nice, wholesome, little-seen image of the then-fourteen year old actress (my age at the time, also!), the back is a silly mish-mash of a few badly cropped stills from THE EXORCIST and a bunch of apparently random images, mostly from older, unrelated horror films! In retrospect, I'm thinking the "official" club--which I think I contacted through an ad in RONA BARRETT'S HOLLYWOOD--probably wasn't!
Posted by Booksteve at 12:42 PM