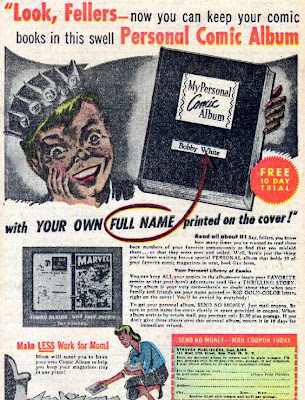 I will admit to a bit of shame as I admit to you, dear reader, that, as a child, I regularly destroyed my comic books,tearing off covers, ripping out stories, punching holes in them and collecting them in big ol' 3 ring binders! At one point I had ten thick binders full of comics! Later on, I went to a more compact format with the smaller paper notebook binders. 33 of these eventually. I still have three of the notebooks and about eight of the later series--all filled with odds and ends from my misspent youth. Sigh. If only I had had these personal comic albums from a couple decades earlier! Wonder how many of these things--filled--are still around?
Posted by Booksteve at 8:42 AM