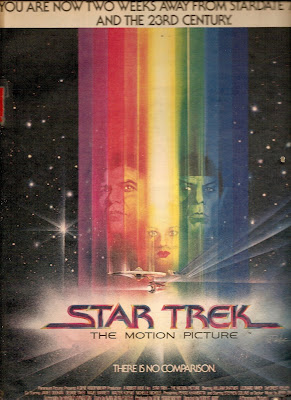 28 years ago, all of us fanboys were anxiously awaiting the arrival of this-STAR TREK: THE MOTION PICTURE. It was probably called that rather obvious title so that there would be no one who could confuse the upcoming release with TV episodes edited together for the big screen. This was a fairly standard practice in those days, often for overseas markets, and had been done with THE MAN FROM U.N.C.L.E., THE GREEN HORNET and various other cult programs. Most of us, though, were well aware that this was something new. This was something that we had literally spent the seventies building toward.

When STAR TREK was cancelled in 1969, its vast cult audience simply couldn't let it go the way the mainstream audience had done. When it popped up in syndication it caught on even bigger than before. Bumper stickers and posters saying "Star Trek Lives!" or "I grok Spock!" started turning up like Kilroy cartoons in WWII! Some fans organized a convention and invited other fans. The other fans organized their own conventions back home and then someone got the idea of inviting the actors. William Shatner had avoided being typecast as Kirk by taking on any and every role he was offered from Promise margarine commercials to nude scenes in BIG BAD MAMA and gimmicky TV series like THE BARBARY COAST. In spite of going directly into MISSION: IMPOSSIBLE as Paris (ironically replacing Martin Landau who had reportedly been the original choice for Spock), Leonard Nimoy had it tougher and ultimately cashed in on the "voice of authority" given him by his Vulcan character to become a sought-after narrator! Although beloved by the fans, the other actors fared less well in Hollywood after STAR TREK and jumped at the ego boosting guest slots at the cons. 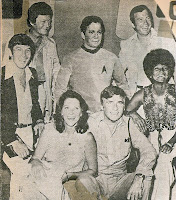 Nearly all of them returned for STAR TREK-THE ANIMATED SERIES, a well-written but badly animated (and over-orchestrated) TV cartoon that ran a season and a half. By mid-decade, there were STAR TREK magazines, books like David Gerrold's THE WORLD OF STAR TREK and the early stages of what has grown into a huge franchise of STAR TREK novels! Rumors abounded that a TV series revival was eminent. Creator Gene Roddenberry put out a record album of one of his lectures in

which he toured the country showing the then unseen version of the original pilot, THE CAGE. As Paramount began to eye creating a 4th TV network, they looked at the cult popularity of STAR TREK as just what they needed for a flagship show and work actually began on a series tentatively entitled STAR TREK II! In the meantime, nearly all of the major cast were photographed as their characters were recreated at a wax museum or when the initial NASA prototype Space Shuttle was named Enterprise. Nimoy was to be the holdout (as would often prove the case!) and his Vulcan character was replaced by a Lt. Xon. Then STAR WARS hit...BIG! Paramount rethought their TV network idea and decided that there were gazillions of repeat dollars to be made from a big-screen STAR TREK movie! Roddenberry tabled his season full of scripts and began work on a feature film screenplay. Even Nimoy agreed to some back for that! The

studio released haughty press releases indicating that the special effects were to be done in an all new process that would make STAR WARS look old-fashioned! Then the months began to drag on with only little hints. A bald alien crewmember? Problems with the spfx? Eventually, Douglas Trumball, who had done the realistic special effects for 2001: A SPACE ODYSSEY and SILENT RUNNING, was brought on to "supplement" the work being done on the film. Soon enough, he was replacing much of the highly touted but not so good new system's already completed scenes with his own. 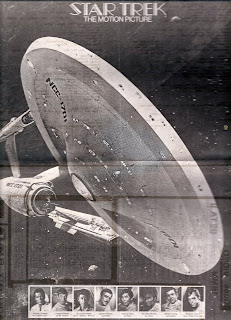 Finally, right at the end of the Trek Decade, these (slightly truncated here) ads appeared in Sunday newspapers throughout the US. Note the tagline, "There is no comparison!" Green was not your best color, Paramount! The second ad clearly shows exactly who the marketing department saw as the star of the picture--the USS Enterprise! The film opened to a collective sense of awe and vindication amongst us fans. Initial reviews were good but director Robert Wise's picture was, quite frankly, long, talky and pseudo-intellectual, ie: not really designed for that all-important repeat business. What fans wanted was the intelligence tempered with character comeraderie and space age melodrama. That appeared in the series with STAR TREK II: THE WRATH OF KHAN and continued on through 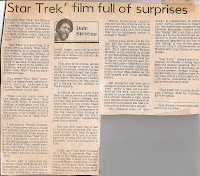 various other entries,later generations and spin-offs. STAR TREK was back for good!

Now we have a new STAR TREK film planned with an all-new cast telling the story of a younger Enterprise crew. In comics terms, let's call it STAR TREK-YEAR ONE. The inevitable complaints and controversies are being heard about recasting but let's face it, McCoy and Scotty are dead, Jim! We got what we wanted--a series of new adventures with our old heroes. Even Shakespeare gets redone with new actors in the classic roles. And hey, Sylar as Spock? Simon Pegg as Scotty!!! Sounds like a good start to me. I'm not familiar with the rest of the actors cast but I find myself looking forward to the new STAR TREK motion picture almost as much as I was the original. Why, even Leonard Nimoy, the perpetual holdout, will be present to, in some way, bring the piece full circle. Can't wait!
Posted by Booksteve at 8:05 AM