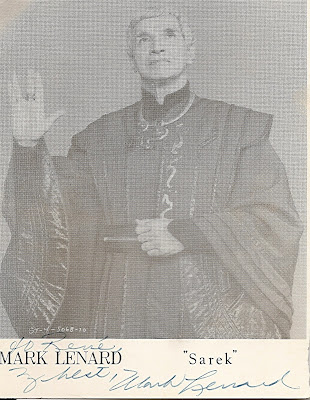 There's been speculation all over the Net these past few days about who's playing Mr. Spock's father, Sarek, in the new STAR TREK film. Well, whomever it turns out to be (if anyone), he'll have a tough time matching the perfect combination of dignity, strength, aloofness and passive arrogance brought to the role by the late Mark Lenard on TV and in the early movies. Lenard often played the heavy, probably most notably in ABC's HERE COME THE BRIDES (itself later metamorphosed into a STAR TREK novel by Barbara Hambly that we wrote about earlier), but with Sarek, he turned a one-shot guest role into a memorable character and earned himself a place in Trek fandom. This picture here, signed to my lovely bride (may she live long and prosper) was obtained by her Trekkie Ex at a 1988 Indiana convention.
Posted by Booksteve at 9:29 PM