Movies That Fell Through the Cracks # 31 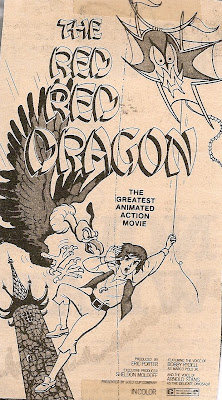 1972’s THE RED, RED DRAGON was Australia’s first feature-length animated cartoon and by all accounts was an enjoyable, energetic musical fantasy. It apparently played kiddie matinees throughout the US but it never played around here. While it looks like the kind of film you see in the dollar bins at WalMart, IMDB says that the picture (also known as MARCO POLO JUNIOR VS THE RED DRAGON) has not been released on video in any form due to a major need for restoration.
US pop singer Bobby Rydell, whose career was fairly non-existent by that point, is the young hero and TV’s voice of TOP CAT, the great Arnold Stang, is the title dragon! The only other recognizable voice name is that of Arthur Anderson, the old-time radio actor best known as the voice of Lucky in the original Lucky Charms commercials. Whether or not it’s the same guy, I’m not certain as the name is a fairly common one. Since producer/director Eric Porter was previously known for his commercials, there certainly could be a connection there.
Now the REALLY interesting thing about this animated feature is that it was written by Sheldon Moldoff! Yes, THE Sheldon Moldoff who drew DC’s BLACK PIRATE and HAWKMAN for many years in an ersatz Alex Raymond style and who has since been revealed to have ghosted Bob Kane for many years on BATMAN! THE Sheldon Moldoff who is now given credit for suggesting to Bill Gaines that EC might start doing horror stories! THE Sheldon Moldoff who has been a mainstay at comic book conventions in recent years! Shelly also was listed as Executive Producer. His only other IMDB credit is for 2001’s animated feature, MARCO POLO: RETURN TO XANADU which, I believe, is actually a remake for which Moldoff is credited for his original story.
Posted by Booksteve at 11:17 AM