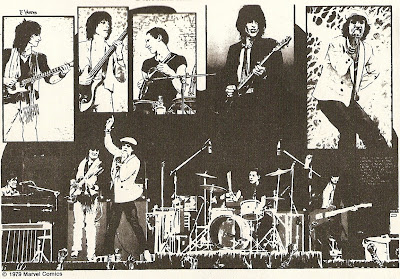 In 1977 Marvel Comics gave us the notorious blood and ink KISS comic magazine. In 1978, Marvel offered a colorful but rather simplified BEATLES bio-comic mag. Did you know, however, that in 1979 Marvel was going to offer a similar SUPER-SPECIAL history of THE ROLLING STONES? To the best of my knowledge it never appeared in either the US or foreign markets. To be drawn (or lightboxed from the look of it) by Tom Yeates (who went on to, amongst other things, an unjustly forgotten run on the pre-Alan Moore SWAMP THING), the announcement and this art appeared in the mid-1979 issue of Jim Steranko's MEDIASCENE tabloid. The brief mention of the upcoming book indicated that former Kubert school student Yeates had originally been signed for a 12 page back-up but that his art was so good he was given the whole book.

The announcement of the Stones comic is followed by an announcement that Marvel was planning something even bigger the following year--developing--in conjunction with Casablanca records-- a REAL rock group that would actually be on the charts and appearing in the comics at the same time. This project eventually coalesced into not a GROUP but...THE DAZZLER! To quote Wikipedia's entry on that character: Dazzler was originally developed as a cross-promotional, multi-media creation between Casablanca Records, Filmworks, and Marvel Comics until the tie-ins were dropped in 1980.
Posted by Booksteve at 11:03 AM