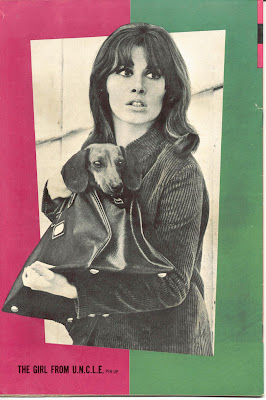 Stefanie Powers became a favorite actress of mine when she played April Dancer, the title GIRL FROM U.N.C.L.E. onm NBC in the sixties. Prior to that she was a fairly successful small part actress in films but it was only with the campy U.N.C.L.E. that her comic talents were allowed to blossom. In later years, her most memorable performances, including her long run in HART TO HART, would captalize on her breezy ability to balance light drama with humor.
In July of 1973, Stefanie appeared in summer stock in Dayton, Ohio (don’t ask me the show) and I took a chance by mailing my very first celebrity fan letter to her in care of the theater where she was appearing. A week later, I received the response seen here, rather obviously written on motel stationary. Although Dayton is only an hour or so from here, when I was fourteen it seemed so much further and it was inconceivable that I might actually see her so I had written a brief letter. In order to facilitate a response, I asked her the following questions to which you can see her answers:
1-I keep seeing your name spelled with an "f" and a "ph." Which is correct?
2-I’ve read where you’re married to Gary Lockwood. When did you get married?
3-Where were you born? 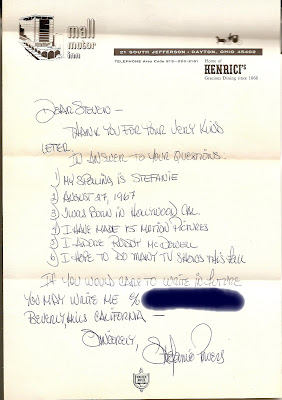 4-How many movies have you appeared in?
5-My favorite actor is Roddy McDowell and I’ve seen you in several things with him. Do you like working with him?
6-Will you be appearing in any TV shows in the new TV season?
Several things to note:
She and Lockwood were already divorced nearly a year at the time but I had no way of knowing that.
Both Ms. Powers and I misspelled the name of my FAVORITE actor, Roddy McDowall.
She writes in all caps except for the occasional lapse. Weird.
I removed the address she gave me to write her although I’m certain it’s no longer valid. I did write but never again received a response.
Her spelling may be with an "f" but it wasn’t originally "Stefanie" but "Stefania." Stefania Zofya Federkiewicz to be exact and while she may well have been born in Hollywood, I’m betting her parents weren’t.

Obviously she dashed off this letter hurriedly but it meant a lot to me that she took the time at all so let me thank you publicly, Stefanie Powers, for being the highlight of my year that year and a wonderful memory ever since!
Posted by Booksteve at 7:16 PM