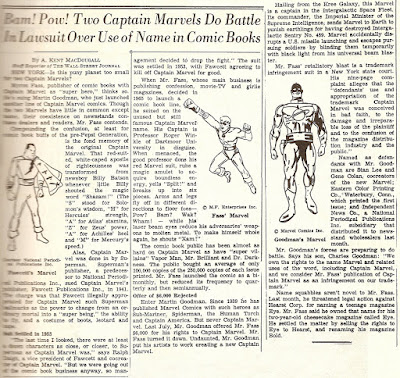 Here, from a 1968 issue of WALL STREET JOURNAL, are some details in the CAPTAIN MARVEL vs. CAPTAIN MARVEL suit! More specifically, notorious rip-off publisher Myron Fass was suing Martin Goodman's Marvel over THEIR stealing of HIS trademark on the name CAPTAIN MARVEL after Fass allegedly refused to sell the rights to Goodman for $6000.00! Fass, you old-timers will recall, published a rather insipid hero of that name who was in actuality a robot who yelled "SPLIT!" to separate his various body parts (Wow! What a cool power! Ahem.) To reunite his wayward arms, legs, etc., he would yell "Xam!" His book was populated with trademark-infringed characters such as Plastic Man, Bat-Man and Doctor Doom. And yet here he was suing the big guy claiming THEY were infringing him with their new Kree spaceman Mar-Vell! No idea how this one turned out. Sam? Anybody?
Posted by Booksteve at 7:49 AM