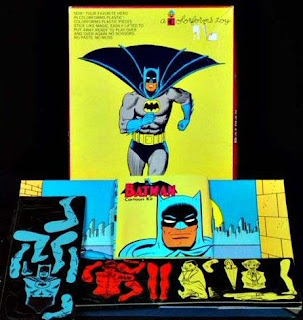 Lifted from the 'Net, here's an item that I somehow no longer have-BATMAN COLORFORMS. (Well, actually, I do still have Batman's left leg buried in a junk box somewhere but...) In retrospect, in spite of this box's Murphy Anderson art, Colorforms were a pretty boring toy. You manipulated little bits of clingy plastic on a cardboard backdrop to show characters in different poses. Still, on a day like this where I've been up since 4 after only a couple hours of fitful sleep and fever dreams, I long for the days when my seven year old self could lie shirtless on the floor with Batman Colorforms and let his imagination soar. With me sick and BookDave on the injured list, it could be a lot of fun for us both. 'Course, said seven year old self didn't have three cats and a dog to crawl all over him when lying on the floor 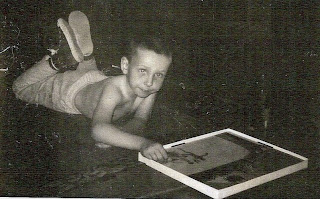 (or nearly as much trouble getting back up again come to think of it!). Sigh. Guess that's why they call them "the good old days."
Actually, that box looks too big. Maybe that's not Colorforms in the picture at all...in which case, never mind. I've been sick, people! Gimme a break!
Posted by Booksteve at 6:38 AM