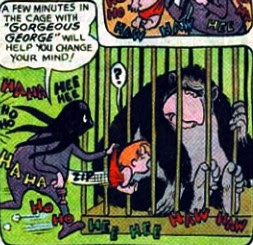 Here’s a comics mystery that I’ve never seen mentioned anywhere but which has bugged me from time to time since 1969! Like many super hero fans in the 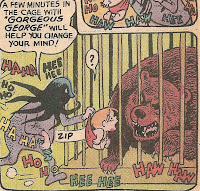 late sixties, I was a closet fan of Sheldon Mayer’s brilliant SUGAR AND SPIKE comics for DC. In 1967, SM (as he referred to himself during that period) introduced a new character into the strip named Bernie the Brain. Bernie’s precocious intellect was perhaps overly milked for the next couple of years before the book settled back into more traditional patterns. Still, that first story was quite a good one in which Bernie, Sugar and Spike take on an evil mastermind named the Octopus.

Okay, here’s the mystery: In 1967, when the story first appeared, Spike is tossed into a cage with a baby gorilla. In 1969, only two years later, the story is reprinted and that baby gorilla is now a baby bear! No other artwork seems to have been

changed (other than a new splash page anyway). The bear and parts of the panels in which he appears seem to have been paste-ups. Why? Did SM or someone decided that a bear wasn’t as scary as a gorilla? Were there letters complaining about the gorilla? Quite frankly, the bear looks scarier to me! Since 1969 I’ve wondered why this was done! Steven? Sam? Anybody? You guys haven’t let me down so far.
Oh and DC, howzabout a SUGAR & SPIKE Showcase edition? Surely you realize that it’s the fanboys who would buy it, not kids!
Posted by Booksteve at 2:16 PM