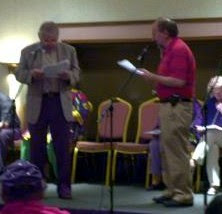 Okay, the 21st Annual Cincinnati Old Time Radio and Nostalgia Convention is itself now history! To say it was a bit different than normal would be an understatement. Convention founder and guiding light Bob Burchett was absent for the first time due to last minute health issues. He led the pack of missing vendors, dealers, regular attendees and behind the scenes people. For one reason—health, office politics, finances and death mostly-- or another there were a dozen or more fixtures of this yearly show who just weren’t there this year. That definitely changed the dynamic and yet for some reason it seemed more enjoyable to my family than it had in several years.
The Dealers’ Room remained shrunken to the level it had been in recent years and every table was filled. The problem was that the diversity was gone. This year I saw no vinyl or reel-to-reel for instance and only a stray box of comics here and there. One table was all autographs and one delightful nostalgic ephemera but for the most part, everyone was selling DVD’s and MP3s. Now I will admit to picking up a couple of those myself but what happened to the variety? 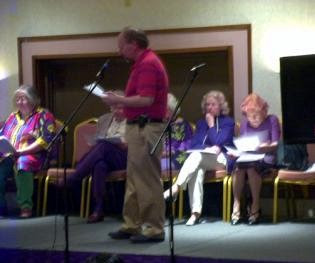 The recent death of Hal Stone was recognized with a moment of silence but did not cast any kind of shadow over the proceedings. In fact, Bob Hastings was in quite a good humor even in an eavesdropped conversation in which he was comparing notes with the other guests on their new hearing aids and how much SAG would pay toward them.
It was good catching up with old friends such as Dan, Kathy and the ever-delightful Karen (World’s Biggest Jack Benny Fan) Hughes. Even my 10th grade Spanish Teacher showed up on Friday! Everyone signed a giant card for Bob Burchett. Re-creation director Don Ramlow (sporting a mullet look) who unexpectedly inherited a lot of Burchett’s "host" duties for the two days simply signed and wrote, "HELP!" Ramlow did an excellent job, however, and made it all look quite effortless.
I personally spent the day luxuriating in the continued kudos for my previous night’s performance. Wow! I must have been good! Say, if you or anyone you know taped it can you get me a copy. I’d love to hear what all the fuss is about! Anyway, throughout the day I was stopped continually by friends and strangers alike for a few moments of praise, a hug or a heart handshake. One guy even yelled at me from his car, "HEY YOU RAT!" He followed with a thumbs up and a "You were GREAT last night!" though so as my blood pressure settled back down I yelled, "MOUSE! Not rat!"
The Saturday re-creations included FORT LARAMIE, ESCAPE, CANDY MATSON (misidentified yesterday as GUNSMOKE, clearly an obvious mistake!) and the All Ears Theater production of THE GOLDEN BIRD. Bob and Rosemary Rice delightfully re-created THE BICKESONS in several sketches also and Rosemary and Esther Geddes-McVay did Jack Webb and Johnny Carson’s classic DRAGNET spoof, a bit Esther and her late husband Tyler had long since made their own. 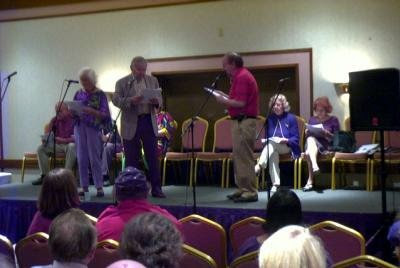 My participation as an actor on the final day was as a stand-in for a member of the Kalamazoo-based All Ears Theater. As such, I actually had 5 roles in THE GOLDEN BIRD, a funny fairy tale original script written by Ramlow and based on a Brothers Grimm story. I was "Man," "Innkeeper," "Groom," "Guard # 2" and the screeching of the title bird for a total of maybe a dozen lines. The trick here was to diversify the voice sand I’m told I succeeded.
The ESCAPE was a vintage but apparently unproduced adaptation of THE CANTERVILLE GHOST that gave Bob Hastings a chance to be delightfully sputtery and silly onstage for an appropriate finale.
My wife and I always skip the banquet and go in only as the re-creations are about to start up. This is largely due to the ridiculous price the hotel charges for what is essentially mystery meat. For a third of the cost, we took our chances at a local Golden Corral Restaurant. (Don’t get me started on the hotel in general. Hopefully next year they’ll move it.) As we snuck in at the back this year, my wife was given a rather expensive telescope to be given to our boy anonymously from someone who had enjoyed my performance! Wow! We literally didn't know what to say. The awards ceremony at the banquet was relatively brief this year as many of the recipients had not been able to attend! It was, however, announced that, in spite of this year’s issues (and what I deemed to be a considerably down attendance also) there WOULD be a 22nd Convention! Can’t wait! By the end of the long day, though, my symptoms were returning--puffy eyes, sore throat, tired muscles. It was almost like the spell was wearing off and I was returning to being just an ordinary guy again after my annual two days of fame. Sigh.
The pictures seen here are of me onstage in my triumphant mouse performance. They were lifted from Charlie Summers’ website Nostalgic Rumblings where you can find lots more convention pics. Charlie, although unable to attend this year, was, himself, an absentee award winner at the banquet! That's Bob Hastings and I in the first one, in the second note my colorfully dressed sweetheart who announced and in the third, L-R, Esther Geddes-McVay standing, Bob, myself, Rosemary Rice and the delightful Ruth Last.
Posted by Booksteve at 4:43 AM