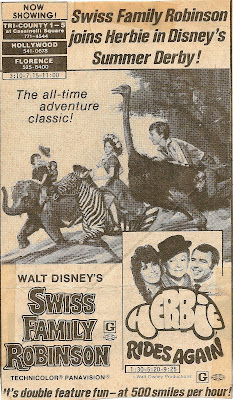 Awhile back, a reader requested that I run some ads of the unusual seventies double features Disney released. I'm sorry to say that the movie ad section of the Library is currently undergoing renovation (I'm slowly filing them in some semblance of order!) and this is the first one I've been able to find. Here are two films that have virtually nothing in common- SWISS FAMILY ROBINSON is, of course, the 1960 semi-classic with the great Sir John Mills (father of Hayley!), James MacArthur and Disney regulars like Tommy Kirk and Kevin (Moochie!) Corcoran. HERBIE RIDES AGAIN was the several years too late and nowhere near as entertaining sequel to THE LOVE BUG featuring likable Ken Berry (sort of a Dean Jones lite if you will) and the first actress who ever responded to one of my fan letters, Stefanie Powers (and yes, "f" is correct, not "ph." Stefanie TOLD me so herself so HAH!). The twist here...and the only thing these two films seem to have in common, really...is the appearance of Helen Hayes, the First Lady of the American Theater. Not that Ms. Hayes appears in ROBINSON. The common thread is that James ("Book 'em, Dano") MacArthur is her son! Sometimes ya just gotta look a little bit deeper to find a reason...other than profit...for teaming up certain films!
Posted by Booksteve at 6:45 PM