Convention. Every year I look forward to that weekend like no other. Unlike many conventions, this one is more like a family reunion in which my wife and I get to catch up with old friends and celebs and, if we’re lucky, perform in some of the re-creations of OTR shows onstage.
All of this got me thinking today that the very first old time radio star that I ever met was also the very first movie actor I ever met, the first author I ever met AND the first comic book character I ever met! That would, of course, be that ol’ renaissance man himself, Bob Hope.
I met Bob at the autographing seen here in this 1976 newspaper clipping, about ten minutes before this picture was taken. He

was in Cincinnati pushing his book, THE ROAD TO HOLLYWOOD, written with film critic and celebrity biographer Bob Thomas. The line was long and Bob appeared wearing the same loud coat he had been wearing an hour earlier on a live local TV talk show plugging the signing. Everyone was rushed through the line so all I got was this signature. I tried to say something to Mr. Hope but after watching him ignore several folks in front of me as he did me, I decided that he was pretty much deaf. He was just smiling and signing.

ws that Bob was a film star from the late thirties through the sixties, a radio comedian for more than a decade, and a television pioneer. Not as much has been noted about his writing career. Perhaps this is because his books were reportedly all almost entirely ghostwritten by his legendary writers. In and of itself, that isn’t a bad thing as they undoubtedly sounded more like the Bob Hope the public 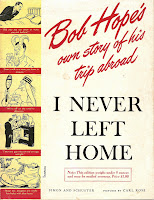 knew and loved than the real man did. Bob’s first books appeared during World War II and his final credited one within the last decade. Many of them deal with his various endeavors at entertaining our troops and are quite entertaining. One of the best is the 1944 I NEVER LEFT HOME.

also headlined his own DC comic book for nearly two decades. The comic featured a sitcom version of the real Hope in various adventures similar to his movies. Later additions included a talking dog (Harvard Harvard the third), a monstrous supporting cast and the legendarily bad super hero parody, Super-Hip! Mort Drucker and Bob Oksner provided art for Arnold Drake’s stories during the book’s peak years and Neal Adams (of all people) finished out the run (and no, he didn’t make Bob all dark and gritty). Hope himself is said to have kept a complete mint condition set of the entire run.
In real life, Bob Hope was a controversial figure for his right wing politics, his alleged racism, homophobia, misogynistic womanizing and even more extreme claims made by the lunatic fringe 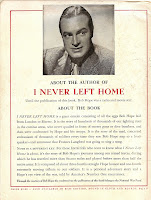 (Google Brice Taylor) that have never gone away. He also devoted probably millions of hours to charities around the world and arguably made more people laugh than anyone before or since. Woody Allen once said that Hope was also one of his favorite actors as he essentially played the cowardly lothario character in dozens of his films to the point where we believed he was playing himself. As he lived to age 100, one could easily make the case that he stayed in the spotlight too long and we all watched him deteriorate into a punchline very sadly and very publicly. Still, at the end of the day, both good and bad, HE was Bob Hope and in spite of all the huge cultural and pop cultural changes in the twentieth century, his name would still have to be near the top of the list of most important entertainers and humanitarians of the century. Thanks, as they say, for the memories, Bob!
Posted by Booksteve at 11:02 AM