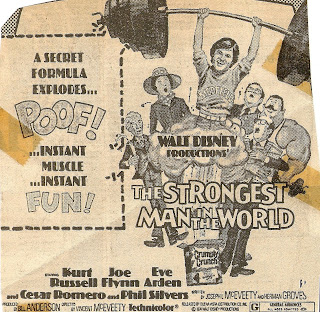 Dexter Reilly probably never visited a grindhouse but I did fairly regularly.
At age four one of my early favorite TV series was THE TRAVELS OF JAMIE MCPHEETERS starring—as unlikely as it sounds—Charles Bronson and the Osmond Brothers—oh, and Kurt Russell as Jamie. After that, whenever I’d spot him on another show I’d say, "There’s Jamie!" Eventually, it became "There’s Kurt!"
In 1969, with the release of Disney’s live action feature-length sitcom THE COMPUTER WORE TENNIS SHOES, Kurt Russell was added to my permanent favorites list. He played a different role in THE BAREFOOT EXECUTIVE but it may as well have been COMPUTER’s "Dexter Reilly" as the entire film seemed like just another "episode." Dexter DID return in NOW YOU SEE HIM, NOW YOU DON’T and in a final belated sequel, THE STRONGEST MAN IN THE WORLD. Surrounded by sidekicks played by ( among others) the wonderful Michael McGreevy and cartoon voice legend Frank Welker, Dexter’s world is also home to a roster of enjoyable character actors including Joe Flynn, Cesar Romero, Phil Silvers, Eve Arden, William Schallert and Dick Bakalyan. These are people that I would pay to see chew the scenery even if there were no plot…and there barely was in these pictures.
In the first film, Dexter becomes super smart. In the second, invisible. By the third, six long years later, he’s super-strong...and STILL in college. After that, Kurt tried several times to reinvent himself as a grown-up star, finally succeeding with the help of director John Carpenter who cast him against type in ELVIS, ESCAPE FROM NEW YORK and THE THING.

Still, his life was inextricably tied with Disney. Seems he appeared as a child in that studio’s THE ONE AND ONLY GENUINE ORIGINAL FAMILY BAND which also featured a young lady named Goldie Hawn in a small role. When the two met up again years later, they became one of Hollywood’s more stable couples.
I remember seeing Kurt on an early ‘80’s Letterman show where he said he would really have preferred to have become a baseball star. He then told a story that shocked me and which I won’t repeat lest I heard it wrong, remember it wrong or missed a part where he said it was a joke. Still, it changed my thinking on him. Since then, he’s still been a pleasant familiar face in films but never again as much as he had been. That said, I am REALLY looking forward to seeing GRINDHOUSE. Having sat through my share of real grindhouse double features as an impressionable teen, it’s all nostalgia for me…including Kurt who, I hear, actually brings vestiges of Dexter Reilly to the role!
It seems that if I don’t see a movie in its opening week, I usually miss it until cable or DVD and I’m working the next seven days straight. If I DO catch GRINDHOUSE, I’ll let you know what I think!
Posted by Booksteve at 8:36 PM