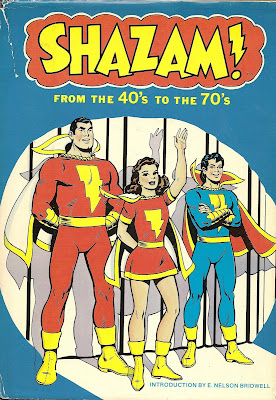 Screenwriter John August (Look him up yourself. I haven’t liked any of his movies that I’ve seen) is being raked over the coals today almost as badly as Don Imus for his holier-than-thou pronouncement that the original CAPTAIN MARVEL comics were crudely drawn and inconsistent and he CERTAINLY isn't going to base his upcoming screenplay on them. Like classic TV, he says, "Old things suck." Ever the diplomat, let me point out that…well…those comics WERE crude and inconsistent! However…and it’s a BIG however…perhaps more than any other Golden Age comic, the adventures of the so-called "Big Red Cheese" became streamlined and stylized so that they looked little like other comics. Through the art of
C. C. Beck, Kurt Shaffenberger, Mac Raboy and Pete Costanza (amongst others) Fawcett’s Marvel Family took on a clean, modern look and feel and developed a perfectly workable and unique mythology. Yeah, I agree, those early WHIZ stories are crude. Even Simon and Kirby’s take on the character was more interesting than good. Skip 1940 then and cut to, say, 1947 or 1950 and discover the inimitable whimsy that permeated the best stories of Billy Batson and crew. Oh and "Old things suck" he says? Pity him, my friends. He’ll never know the joys of the Marx Brothers, Laurel and Hardy, The Three Stooges, CASABLANCA, CITIZEN KANE, the early BEATLES, Sean Connery’s 007, EC’s, Steranko art, underground comics or, depending on where he draws the line at "old," maybe even the original STAR WARS! Perhaps some friends of Mister August’s could perform an intervention and force him to watch Karloff’s FRANKENSTEIN.
Posted by Booksteve at 7:53 PM