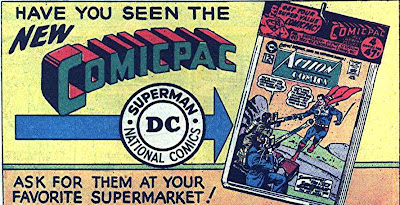 Any kid growing up in the sixties will undoubtedly remember these or some variation of same. This ad from 1962 shows an "official" bag of 4 DC comics (with a penny savings!) but every mom and pop grocery, carry-out, pony keg, etc. would, at some time or other, carry bagged comics. You could see what the front and back one were but you had to take your chance with the middle one. Usually these were "stripped" comics (with at least the top third of their covers removed) that had been reported as returned by the "reputable" newsdealers but somehow got bagged and sold for a 100 percent profit by perfectly nice folk who just didn't get that they were doing anything wrong! I still have a lot of coverless comics from these kind of bags, some of which are labeled "3 comics for 25 cents!" In fact, every once in awhile I STILL see comic packs although now they're usually non-returnable issues that turn up in 3 for 3.99 packs in drugstores and such.
Posted by Booksteve at 7:30 PM