Thirty Years of The Rockford Files 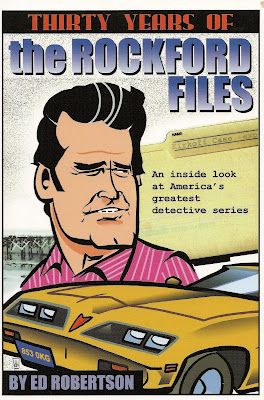 Bob Hastings does the throwaway answering machine intro on my second favorite episode of THE ROCKFORD FILES. I asked him about it between rehearsals at last week’s OTR Con and he told me he had not the slightest memory of it. He speculated that perhaps they had asked him to record it during one of his two actual appearances on the show and than ran it at a later time. That makes sense. It’s also one of the few aspects of THE ROCKFORD FILES not covered in Ed Robertson’s obsessively detailed history of the series, THIRTY YEARS OF THE ROCKFORD FILES.
THIRTY YEARS OF THE ROCKFORD FILES is a massive update to Robertson’s mid-nineties book on the series, adding hundreds of pages of new material on the original run as well as on the many reunion movies done for CBS. In case you’ve never seen it, THE ROCKFORD FILES was a showcase for star James Garner, the easygoing MAVERICK of the 1950’s whose film career never quite took off as expected. Returning to TV in the seventies, Rockford became a sort of modernized version of the role that made him famous, honed and geared to the actor’s considerable skill at "playing himself" by Roy Huggins, Stephen J. Cannell and a handpicked production crew.
A successful yet often downtrodden detective in L A, Rockford’s "files," supposedly cold cases that he would reopen and solve, quickly fell by the wayside and Garner’s charm, the show’s quick wit and an incredible recurring cast of characters made the series’ Emmy-winning reputation.
As is the norm for this type of book, Robertson starts with a history of the show’s creation, cast bios, then an overview of each season, a look at every individual episode (featuring both plot details and behind-the-scenes info) and then a look at the post-network life of the series and the characters. What makes this book different is in the details. For instance, every episode listing starts with a transcript of the aforementioned answering machine message. Also included is a fascinating ongoing look at how the various guest stars crossed paths with Garner at other junctions throughout his career.
The backstory of Rockford gets complicated but Robertson sorts through and simplifies it as much as possible. It seems it was originally to be an episode of TOMA, a series which had major issues and was eventually reborn as Robert Blake’s BARETTA. Only when Garner became involved did it slowly develop the MAVERICK connection. As the series goes on, the author details the various corporate dealings that eventually led to the loss of semi-regular Gretchen Corbett as well as the major financial and health issues that ended the original run and stretched out in the courts for a decade.
Filled with marvelous stills, candid shots, ads, schedules and for some reason, a number of pointless caricatures by the gentleman who did the less than attractive cover, THIRTY YEARS OF THE ROCKFORD FILES is a treasure trove not only for fans of this series but for anyone who just wants to read an in-depth, well-researched story about how television worked in the seventies.
We have an entire bookcase of TV histories here at the Library. Some (like the official Mary Tyler Moore and Murphy Brown books) are extremely disappointing. Others are TV geek obsessive and wondrous. Ed Robertson’s THIRTY YEARS OF THE ROCKFORD FILES has just earned a place near the top of that list.
Here’s Ed’s site: Ed Robertson: Author, Journalist, Ghostwriter, Pop Culture Critic, Television Historianor you can get a copy from Amazon at: Amazon.com: Thirty Years of The Rockford Files: An Inside Look at America's Greatest Detective Series: Books: Ed RobertsonThe price is a tad steep but the content is well worth the price. Thanks, Ed.
By the way, in case you're wondering, my two favorite episodes of THE ROCKFORD FILES are the ones featuring Tom Selleck as Lance White, the "nearly perfect" detective for who everything falls right in place…much to Rockford’s continuing chagrin.
Posted by Booksteve at 9:38 AM