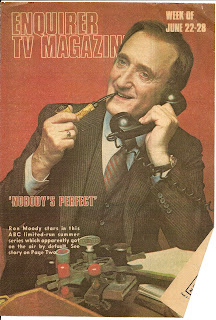 It’s funny how the mind works. This morning I caught a few hilarious minutes of a Peter Sellers Inspector Clouseau movie and found myself remembering this short-lived and forgotten TV series. NOBODY’S PERFECT had a brief run on ABC in the summer of 1980 but had actually been filmed a year or more earlier. Designed as a sort of TV version of Clouseau it starred the versatile British actor Ron Moody (Fagin in OLIVER a decade earlier) as bumbling Scotland Yard Detective Inspector Roger Hart on loan to the San Francisco Police Department. It had originally been on the previous year’s prime time schedule as HART IN SAN FRANCISCO (Hold the obvious Tony Bennett jokes. I’m sure they were everywhere at the time.) but was replaced by James Gregory’s DETECTIVE SCHOOL (featuring ancient Douglas Fowley as "Robert Redford."). Neither was particularly funny. NOBODY’S PERFECT owes its unsuccessful off-season run to ABC’s attempt to at least earn a little back on its investment in the otherwise wasted episodes. Moody was great as the klutzy, accident-prone detective but, like Alan Arkin and Steve Martin, his real problem (even though he was not actually playing Clouseau) was that he was NOT Peter Sellers.
Posted by Booksteve at 11:10 AM