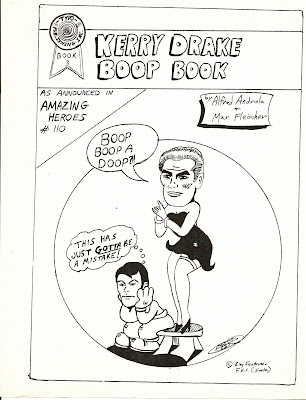 This unpublished cartoon by myself was intended for an issue of AMAZING HEROES in the mid 1980's. As I recall, a previous issue had listed upcoming comics including some comic strip reprints from Blackthorne such as DICK TRACY Book 6, BETTY BOOP Book 3 and the erroneously advertised KERRY DRAKE BOOP Book 3. The latter obvious blooper made me laugh like crazy so I took pen in hand and drew up this mock cover of what KERRY DRAKE BOOP might look like. AMAZING HEROES was apparently not amused. So now, for all to see for the first time ever, is that piece. It would be another seventy or so issues before I would make my actual AH debut.
Posted by Booksteve at 10:50 PM