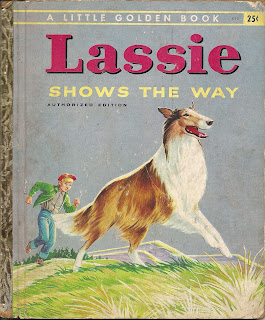 I saw a picture of Jon Provost at an autograph show last week and was reminded that at one point LASSIE was my favorite TV show when I was a child and this book was my favorite book! Maybe it was because our downstairs neighbors had a collie. I don’t know. I probably got the book used as it was the first LASSIE Golden Book from 1956 and I would have had it circa 1961. On the other hand, since the boy in the story is named "Tim" and yet looks more like "Jeff," the dog’s original TV owner, it’s entirely possible that this is a re-issue with names changed to reflect the changes that occurred on the show in 1957.
LASSIE, in case you didn’t know, was the perennial story of a boy and his dog. It began on CBS in 1954 after a successful run for the old girl (always played by a male dog because they looked better!) in MGM features. Lassie was a wonder collie. She could literally do anything and was often parodied on other shows for her seeming feats of amazement such as pulling people out of wells.
I spoke with June Lockhart (who played Timmy’s mother) on the telephone one time in the early 1980’s and I’m sad to say that all we talked about was LOST IN SPACE and I never told her what a big LASSIE fan I had been! Around that same time, though, I started calling one of those 1-800 Trivia contest lines. Answer seven questions at $1.00 per minute and you could win $100.00.

The first six were inevitably easy but were padded out with "Wow! You sound like an expert at this type of thing!" comments in order to cost you more cash. The final question was meant to be hard. When I called, though, the final question was "What are the last two digits of the last year that LASSIE appeared on network television?" HAH! I knew that! I typed in "74" and won 100 bucks! Feeling cocky (as they undoubtedly hoped) I called again soon after wards and proceeded as quickly as allowed through the first six questions only to have the automated question machine hand me the EXACT SAME QUESTION ABOUT LASSIE!!! Thus, the old girl won me ANOTHER $100.00!
Played by many gorgeous dogs over the years, LASSIE ran for twenty years on the network followed by several more in syndication and at least one revival and a new feature film in the eighties!
Posted by Booksteve at 10:45 PM