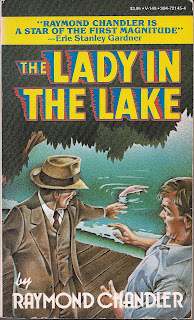 Yesterday, I had to sit at the hospital for some hours as my mother-in-law had an operation so I needed a book. I chose this 1976 copy of Raymond Chandler’s 1943 mystery THE LADY IN THE LAKE. Chandler’s still growing literary rep, of course, rests firmly on the broad shoulders of his cynical tough guy detective Phillip Marlowe. The colorful self-narration, the rumpled hat, the rain-swept streets and the world weariness of the main character have all become cliches of the genre but they all pretty much began with Chandler.
Humphrey Bogart, Robert Montgomery, Dick Powell, James Garner and Elliot Gould all played Marlowe in films. Future cartoon Mister Fantastic Gerald Mohr had an admirable run in the role on radio. Robyn Hitchcock even recorded the short song RAYMOND CHANDLER EVENING which had a marvelously creative video in which a hat (as if on an invisible detective) roamed the rainy black and white streets and bridges to the tune. I’ve enjoyed all of these versions over the years.
Yesterday, though, was the first time I had actually READ Chandler and I was quite impressed. His subject matter featured 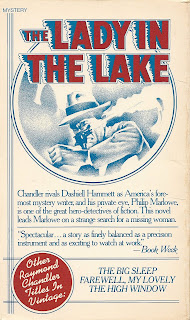 a number of references that would have been considered quite adult in their day—"round heels, " "laying" somebody, etc.—but also told an interesting story with well-delineated characters and an enjoyably descriptive narrative. Somewhere in the vast unread archives (Hey, you know how it is. Sometimes a book catches your eye and you PLAN on reading it but never quite get around to it!) here at the Library, I have a 1980’s British reprint of THE BIG SLEEP. I plan on looking for it this weekend and having another Raymond Chandler evening. If you like detective fiction and you haven’t yet discovered Chandler hit your local used bookstore and you can probably pick up these true classics of the genre for a song!
Posted by Booksteve at 10:38 PM