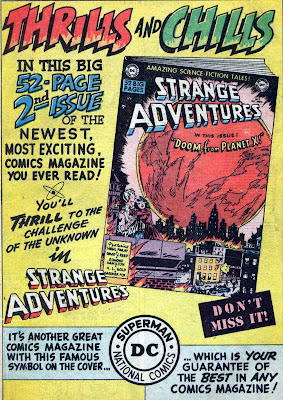 Here's a nifty looking early ad for Julius Schwartz's STRANGE ADVENTURES (issue # 2 to be exact!). Note the rare use of author credits on the cover. Gardner Fox, of course, was a DC mainstay for decades as well as a sci-fi writer (and a western writer and a romance writer and...). Edmond Hamilton was a longtime sci-fi writer who would later create the Legion of Super-Heroes. Although not as well-known, David V. Reed was still writing Superman stories for DC in the seventies. Virgil Finlay was a truly legendary pulp illustrator. Not sure who the other gentleman is/was. Anyone? Note also the foreshadowing in the ad line "You'll thrill to the challenge of the unknown."
Posted by Booksteve at 7:21 PM