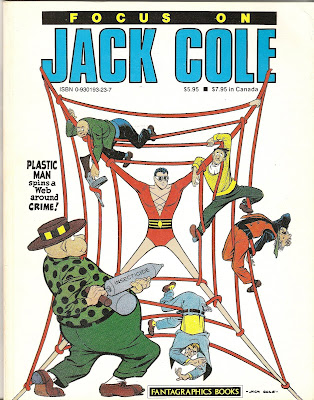 The recent suicides of Brad Delp and Richard Jeni have gotten me thinking about Jack Cole. To say that Cole was successful in his chosen field as an artist would seem to be putting it mildly. In the early forties, Jack Cole drew Lev Gleason’s DAREDEVIL strip and ghosted Will Eisner’s SPIRIT when Eisner was in the Army. Soon afterwards, he created one of the truly unique comics characters, PLASTIC MAN which he wrote and drew for some years. At the same time, his MIDNIGHT, a SPIRIT knock-off, became a staple of SMASH COMICS. Along the way, he turned out hilarious filler comic book stories as well as pioneering tough, violent crime comics. In the 1950’s, leaving PLASTIC MAN to others, Cole became the first superstar cartoonist at PLAYBOY. Later in the decade, using a totally new style, he created BETSY AND ME, the syndicated comic strip of which he’d long dreamed having. Then, in 1958, Cole committed suicide for reasons never made public.

In spite of the fact that he never worked for "the big two," Marvel and DC, Cole’s comics work slowly began to be reprinted in the early sixties. After DC bought PLASTIC MAN, they even devoted a full DC SPECIAL to his classic comedy in the early seventies. By 1986, Fantagraphics published FOCUS ON JACK COLE, a Ron Goulart biography/history that featured lots of black and white reproductions 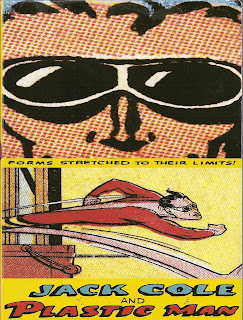 of the artist’s work as well as a full checklist.
In 2001, Pulitzer Prize winner Art Spiegelman and the ever-creative Chip Kidd put out a still in print plastic-covered mainstream bio entitled JACK COLE AND PLASTIC MAN-FORMS STRETCHED TO THEIR LIMITS. With its innovative layouts and splendidly faded reproduction from the original comics, this is a truly beautiful book and a fitting tribute to the lost genius of Jack Cole.

Suicide never makes sense. That’s the lesson we should take away from these tragic deaths. When someone is depressed, stressed or feeling lost, take them seriously. Listen to them. Sometimes just telling someone makes things better. Cole seems to have given no indication of any problems but maybe he did if people were paying attention. Jack Cole went into the Eisner Award Hall of Fame in 1999. It would have been nice if he could have been there.
By the way, I apologize for breaking my 15 month streak of daily posts by missing yesterday. Been dealing with a lot of stress myself.
Posted by Booksteve at 7:13 PM