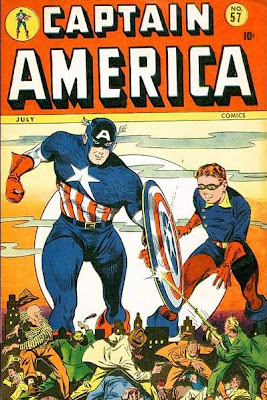 So my old friend Dan Hughes sends me this link today(Spoiler Alert):Shocking event for Captain America - CNN.com Captain America is Dead. Yeah, right! Bucky was dead, too…for 60 years! In fact, the phrase, "Bucky Dead" came to symbolize someone in the Marvel Universe who was not ever coming back. Not nohow, no way! Being Bucky Dead was the equivalent of having the dead parrot sketch read at your funeral. You had "joined the choir invisible" as it were. Still, a talented writer named Ed Brubaker found a way to bring Bucky back…this time for real. So what does "Bucky Dead" mean now? Is Cap "Bucky Dead?"

It would be easy to write this all off as yet another attempt at getting some mainstream publicity via a cheap marketing ploy. You could even say that it plays into what I believe is a still-ongoing rights dispute with Cap’s original creator, Joe Simon. The fact of the matter is, however, that World War II is getting further and further back and Cap’s revival by the Avengers (after being frozen in ice) is getting more and more recent! Look, I absotively guarantee you that Marvel is NOT permanently killing off Captain America. As a licensing property alone the character is worth no small fortune to the company. That doesn’t, however, mean that they have to keep Steve Rogers as Cap. Steve Rogers has never been an easy character to write, In fact, even the best writers chose to define him simply as "the man who became Captain America." As a man out of his time, he is anachronistic and hopelessly old-fashioned. Anyone can wear the Cap suit. The Punisher, maybe? US Agent…again?? That’s probably the route they’ll take.
What Marvel sometimes seems to forget is that in the Marvel Universe Captain America represents not a government or its military but a timeless ideal. In real life, the character has come to mean the same thing. He doesn’t stand for the flag but for what the flag truly means—freedom, hope, safety, security and the dreams of a better world. What they’ve definitely forgotten on the corporate level is that that’s what the character has come to represent in our real world, also. Steve Rogers IS Captain America! It's not the suit, the shield, the super-soldier formula or the Red Skull or the snakes or the Falcon or anything else that make him Cap. He just IS Cap.
Captain America may be gone for now…for awhile…but Cap and what he stands for endures and I have every faith that the one, true Captain America will return yet again. As his creator, Joe Simon, said so accurately in the CNN piece, "We really need him now ."
Posted by Booksteve at 7:37 PM