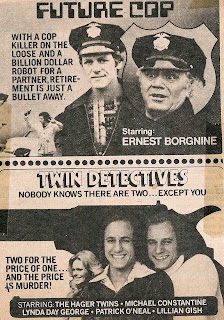 After watching Elizabeth Montgomery's 1974 MRS. SUNDANCE TV-movie last week and realizing, perhaps for the first time that it was a pilot film, it occurred to me that probably all of those Movies of the Week back in the seventies were pilots! That was certainly the case when it came to this particular May 1976 double feature.

TWIN DETECTIVES starred country singer twins Jon and Jim Hager as...wait for it...twin detectives! That was pretty much all this one had going for it other than a nice appearance by legendary Lillian Gish in the guest cast. The Hagers were quite entertaining on HEE HAW where they ended up after its star Buck Owens discovered them working at Disneyland. They were engaging, funny and quite talented musically. Sort of like if there had been only two Hudson Brothers. In fact, according to The Hager Twins Official Website , they still fit that bill. I haven't seen them anywhere in at least 25 years but if you get the chance, take it. I'm betting they're still better entertainers than they were detectives.

FUTURE COP on the other hand starred Ernest Borgnine and Michael Shannon and went through two pilot movies before eventually actually becoming a short-lived series. The plot has echoes of the later ROBOCOP as veteran police officer Borgnine is teamed with a billion dollar android/robot officer. As I recall Shannon's Haven was soft-spoken in the manner of STAR TREK's Data and came to think of the ever-irascible Borgnine as a father figure. Clearly influenced by the Bionic Heroes in vogue at the time, the light-hearted dramady had a unique feel that didn't really catch on in spite of the obvious effort everyone put into it. Borgnine of course continued his long and varied career. Michael Shannon has continued on as a working actor ever since with perhaps his most surprising role being as JFK in an episode of the UK series RED DWARF. In part, it's an uncharacteristically somber episode of that silly series as Lister and crew screw up history by accidentally preventing the Kennedy assassination. Shannon brings a poignant dignity to the role of the President as he is told how important his death is to the development of future generations and agrees to help set things back on the right path.

Haven't seen either of these things since their original airing. Like most pilots they just fade away.
Posted by Booksteve at 10:31 AM