Mine Was a Nielsen Family 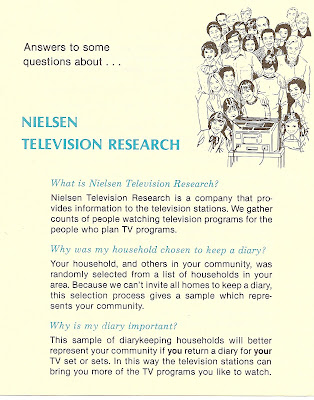 In radio it was the Hooper Rating that everyone cared about but in the television age, it became the Nielsen Ratings. If your Nielsens were high, you ran for ages! HAWAII 5-O for instance must have had HUGE Nielsens! Hmm...that sounds wrong. Still, the Nielsen company would choose households at random and send them boxes to attach to their televisions that indicated what was being watched at all times. Other households would recieve diaries in which we had to document our viewing (and NON-viewing) habits for a week or more. In the seventies, my family became one of the latter. We were a Nielsen family! After talking my dad out of faking information so he could plug programs that were't even on any more but that he wanted back, he, my mother and myself all duly noted our daily TV time and thus undoubtedly saved THE PRICE IS RIGHT! Here's the little FAQ flyer that the Nielsen family sent out with the diaries. Note the vaguely familiar (or just very bad?) TV character caricatures. Are those Bradys or Partridges? Do I see Laura Petrie? Reta Shaw!!?? The plumpish lady on the right sure looks like the housekeeper from THE GHOST AND MRS MUIR to me but why we she be considered a logical TV face for this thing?

Anyway, after we returned the diaries we were sent a nice crisp $1.00 bill as a token for our troubles. About 15 years later, my family was once again chosen to fill out the diaries and once again recieved a crisp new $1.00 bill. (Haven't these people ever heard of inflation?) I have to wonder how, though, in these heady days of fast click channel surfing, anyone can possibly tell who's actually watching anything anymore!
Posted by Booksteve at 9:13 AM