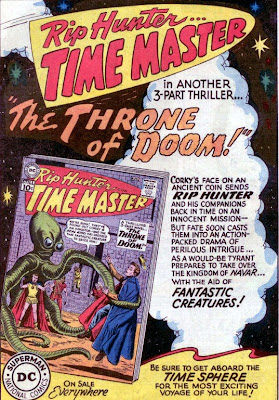 Here's a comic book that I somehow missed entirely in my youth. True, the last of it's 29 issues (not counting 4 earlier SHOWCASE tryouts) came out just before I started collecting comics but I never even ran across back issues in the dingy corners of the junk shops, carryouts and second hand stores that recycled old comics for a nickel. The character has been revived in recent years but like many, retconned almost beyond recognition.

RIP HUNTER, TIME MASTER was originally Flash Gordon crossed with Doctor Who...only five years before the Doctor even came along in the UK. In his time sphere, he and his companions would adventure across time with aliens, presidents, dinosaurs, crusaders and mythological beasties. A few of the earlier issues featured nifty art by Alex Toth, Nick Cardy, the Andru/Esposito team and the already legendary Joe Kubert. For the most part, though, Rip ripped along with servicable, nondescript art by the little-remembered Bill Ely. Scripts, provided mostly by Jack Miller and George Kashdan, took themselves a tad too seriously to be fun. Still, can't help but wonder if the BBC's long-running time traveller was at least slightly influenced by Rip's six years of DC adventures.
Posted by Booksteve at 7:25 PM