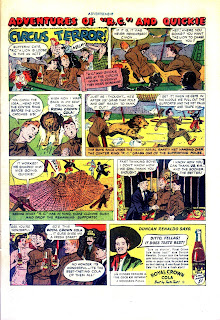 Y'know, a little reported problem with living in the past as we tend to do around here at the library is the commercials. For example, last summer when I was going through almost daily episodes of THE GREAT GILDERSLEEVE, I found myself buying Parkay, one of Gildy's Kraft sponsers, for the very first time. This past week, after a steady diet of reading the ads in golden age comics, I actually bought an RC Cola for the first time since...oh, I don't know, 1969 maybe? RC was my mother's favorite soft drink so it was usually around the house as I was growing up but I only tended to drink it when we were out of Coca-Cola or Pepsi. "The real thing" was my favorite and my Dad hit the spot with Pepsi. Anyway, the adventures of RC and Quickie were a regular ad fetaure in mid-forties comics. Often better drawn than the comics they were in, here's one that features a testimonial from The Cisco Kid himself, Duncan Renaldo! Back when I last drank the stuff, their TV ads were describing it as "Royal Crown Cola. It's the mad, mad, mad mad cola! RC! The one with the mad, mad taste!" Well, I'm not really mad...but I still didn't care for it!
Posted by Booksteve at 9:02 PM