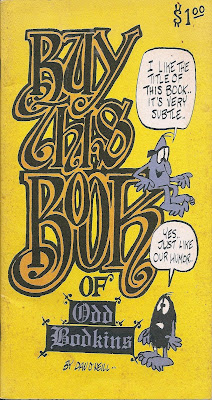 I almost hesitate to mention Dan O’Neill because his story deserves much more time than I intend to give it here today. He’s been on my mind lately, however, as I read through some early underground comics. Undergrounds as we know them (or DID as the distinction really doesn’t exist anymore) appeared in the late sixties and flourished through the early seventies serving as a showcase for the countercultural artistic/political/psychosexual talents of scores of young illustrators including Robert Crumb, Art Spiegelman, Justin Green, Gilbert Shelton and Bill Griffith. The thing is, though, that Dan O’Neill was there when they got there. In fact, his deceptively simplistic ODD BODKINS strip had been around since the early sixties. The collection seen here is from early 1965!

In the tradition of POGO, ODD BODKINS features cute little characters in gag-a-day strips that slowly and not always subtly begin to make political statements and/or social commentary. This, of course, got the artist some flack and he eventually went underground taking his strip with him. All of that was overshadowed eventually by his participation in the so-called Air Pirates, the loose knit group of UG creators who published several issues of Disney parodies that were amazing but…according to Disney lawyers…too close for comfort. The case became a cause celebre and dragged on for ages in the courts. There have been in-depth books and articles and websites on the whole mess but let’s just say that O’Neill held his ground and he and his career had to pay the consequences for it.
In the eighties Dan himself (or someone claiming to be him.

For some reason I’ve never been certain) sold me a copy of the banned AIR PIRATES FUNNIES # 1 for only 50 cents at a San Diego Con. Dan O’Neill (looks like the same guy to me) appears in the 1988 feature documentary COMIC BOOK CONFIDENTIAL playing pool with some scantily clad women for no apparent reason. He is STILL doing ODD BODKINS to this day as well as marketing merchandise related to the strip. His site at Dan O'Neill Comics Original Odd Bodkins and Comic Book Art Paranoia is the fear of unreal weirdos.Who has time for that,when ...doesn’t seem to be kept up but here ‘tis anyway along with a quick but somewhat more in-depth look at the Air Pirates case: Disney vs the Air Pirates. Whatever else you want to say, the man was a pioneer.
Posted by Booksteve at 7:22 PM