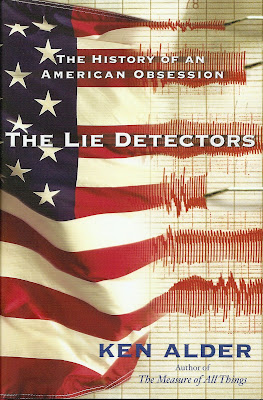 Here’s a new book that might be of some peripheral interest to comics fans. THE LIE DETECTORS presents a history of man’s quest to find ways to get folks to tell the truth. As you might surmise, at the center of this story is the polygraph and as such, a lot of space is devoted to that much maligned device’s ostensible creator, William Marston. As comics fans will no doubt recall, Marston—under the pseudonym Charles Moulton—created and wrote WONDER WOMAN during that strip’s kinkier years.
THE LIE DETECTORS presents Marston’s history as a pop psychologist, his studies of sorority hazings, his self promotion, his bizarre neo-feminist theories of submission and dominance, his unusual polyamorous personal life and the impact of all of these things on his creation of WONDER WOMAN.
The amazing Amazon gets several pages and a picture all to herself with only one glaring error (you ever notice the mainstream always makes ONE error!??). That comes when they say that WW was admitted to the Justice LEAGUE of America as their secretary when, of course, it was the JSA, not the JLA. Even Dr. Wertham’s complaints about the strip (in spite of the fact that they appeared after Marston’s death in 1947) are trotted out yet again. Overall some fascinating background on one of the most controversial comic book creators of them all. Oh and the rest of the book is kind of interesting, too…if you like this sort of thing.
Posted by Booksteve at 9:27 PM