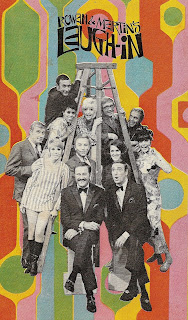 ROWAN AND MARTIN’S LAUGH-IN was a show that I have to say I never truly "grokked." I watched it fairly often as a child because it was the hip thing to do but it always left a kind of a bad taste in my mouth afterwards. It wasn’t dirty—not even in a BENNY HILL way—but it SEEMED dirty which was almost worse. "Sock it to me?" What the hell was that all about? Sock what? "Sock" sounds like "suck" which is dirty isn’t it? Wasn’t it? Was it?? And I would never in a million years bet my sweet bippy!!!!
Anyway, what I did like was the ensemble cast. I never quite understood why all of these hip, mini-skirted babes and nehru jacketed guys were hanging around with two lounge comics like Rowan and Martin though. Arte Johnson was my favorite and in a perfect world this multi-talented comic actor would have been a big star. Deadpan Henry Gibson actually almost became one with Robert Altman’s NASHVILLE where he proved to be a versatile actor. Judy Carne’s English accent alone made her cool during the British Invasion era and her willingness to do anything for a laugh helped. Joanne Worley just seemed like a nice, funny lady who dressed strangely—a lot like some of my mom’s friends. Ruth Buzzi—Ah, Ruthie! She may have been the ultimate TV plain Jane but she was a comic gem! Loved her on this and everything from THAT GIRL to SESAME STREET! Gary Owens, already recognizable as the voice of SPACE GHOST, was fun to just listen to and Alan Sues just seemed a tad perverted no matter what he did which I guess was supposed to be amusing.
Then, of course, there was Goldie Hawn. Goldie was a bit skinny and waifish looking on LAUGH-IN but had an absolutely priceless giggle. The only time we really see this Goldie in movies is in her first co-starring vehicle, CACTUS FLOWER. From THERE’S A GIRL IN MY SOUP and BUTTERFLIES ARE FREE through the wonderful FOUL PLAY and the more recent BANGER SISTERS, Goldie matures into a marvelous free-spirited comic and dramatic actress right before our eyes.
The editor was the real star of LAUGH-IN with cameos and brief cuts abundant throughout. Unlikely folks such as John Wayne, Tiny Tim and Richard Nixon of all people made their marks in TV history on LAUGH-IN. Ringmasters Rowan and Martin were okay. Certainly they seemed to be enjoying themselves. Over the years since Dan’s death, I have developed a much greater respect for Dick Martin as a comedy writer and a master of comic timing.
Whatever made the whole mix work was missing when Producer George Schlatter attempted a revival less than a decade later with an all new ensemble cast out of which all I can even recall is a pre-Mork Robin Williams and a promising but now forgotten comic named Lennie Schultz. Love it or hate it, LAUGH-IN was of its time and even attempted (edited) reruns seem horribly dated. You bet your sweet…nope. Still can’t say that.
Posted by Booksteve at 5:16 PM