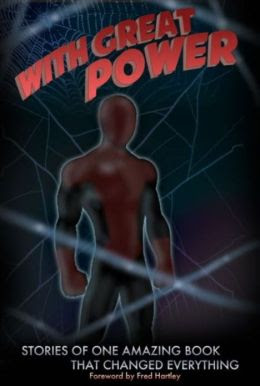 Every Spider-Man fan knows that Peter Parker’s late Uncle Ben once told him that “...with great power there must also come--great responsibility.” Only he didn’t. Unless it was a retcon I missed years later. In Spider-Man’s debut appearance in 1962’s AMAZING FANTASY # 15, it’s Stan Lee who says that in a caption at the end of the story. The final panel. As far as they knew, that would be the last ever appearance of Spider-Man and it seemed like a good way to end the story. It has definitely become the most quotable thing Stan Lee ever wrote.

WITH GREAT POWER is also the title of a recent book with the clever and intriguing premise of following one single copy of AMAZING FANTASY # 15 as it passes through various hands over a period of months, years and decades for more than half a century.

In the interest of full disclosure, WITH GREAT POWER is the brainchild of Rick Phillips who happens to be my first cousin, once removed. Rick has been fairly prolific in self-publishing other books in recent years and here came up with the idea of doing this one as an anthology of short stories. Another cousin—Josh Hall (first cousin twice removed) also contributes.

As with any anthology by multiple authors—some professionals and some amateurs—it’s a mixed bag at best.  Another problem peculiar to self-published works is that one always feels a good editing could have been helpful. The professional proofreader/Editor in me grates at times.

But, that said, let’s ignore style and look at the content.

Even though some of the stories seem a little forced to fit the theme, the book flows well, offering 24 original stories by 14 different writers, the biggest name of which would be Paul Castiglia who has worked as a writer and editor for Archie Comics and runs a fun website about spooky old comedy movies.

The stories herein cover a lot of ground and sometimes touch on some fairly adult themes. Some of them have a decidedly Christian undercurrent.

By far my favorite of the writers is Michael Ciccolini who not only has what I consider the best-written story but also the funniest! He’s one of the professionals but one I had never heard of before. My loss. I’ll definitely look for his name again. Brian K. Morris who, like me, is a staff transcriptionist for the new COMIC BOOK CREATOR magazine, is also good.

Rick himself pops up throughout, with a number of different stories, both short and long, moving the issue of AMAZING FANTASY along the timeline.

All in all, it’s a fun read for the comic book fan who can relate on so many levels to the various “feels” invoked by the folks who own the issue over time in the stories.

This Saturday, if you find yourself around the Akron-Canton area in Ohio, one of the authors, Tyrone Tony Reed, Jr will be at the Akron Con with copies of WITH GREAT POWER. http://akroncomicon.com

You can find info on how to order this or any other books from Rick Phillips at his blog:

http://mailittoteamup.blogspot.com
Posted by Booksteve at 3:21 PM