To hear my mother tell it, my first words were Kennedy, Nixon and Playtex. We watched a LOT of TV around my house, even though that often meant juggling the antenna for half a show trying to get a good picture. Oh, and it was a black and white TV but then, in a sense, it was a black and white world back then as well...especially to a toddler like me.

Considering when I was born, I lived through the last full year of the Eisenhower Administration but I don't remember it or count it. I discovered the handsome John Kennedy when he was running for office, though, and, as our first TV president, I came to know him quite well in my earliest years.

JFK represented to me what I know now he also represented to the country--the promise of progress, the strength of youth, the intelligence of diplomacy and enough charm to brighten the world in what were darker times than we knew. He was my favorite TV star in 1962.

It was in that year that I got to see him in person for what was probably all of 20-30 seconds. Many years later, I looked it up. He was in town to make a speech for a local politician. We lived less than half a block from where his car would be exiting the then still new Interstate highway so my mother carted me down to see him.

We waited in a huge crowd in a schoolyard for what seemed like hours, much of it with me down around people's knees playing by a fence. At some point, though, my Mother lifted me up onto her shoulders and pointed to the street as the crowd started cheering. It was him! The first celebrity I ever saw in my entire life--President John F. Kennedy! He was smiling and waving and I smiled and waved back--something all toddlers were good at in those days when everyone wasn't scared of everyone else.

And...then his car drove on. I remember being disappointed. I'm not sure what I expected. Did I think he was going to get out and come over and shoot a few rounds of basketball on the school court where we were? Or ride my tricycle with me? I don't know but he was there...and then he was gone. Just like that. And I was sad.

A little over a year later, the nation came to feel exactly what I felt that day. The unfulfilled expectations, the hollow feeling of suddenly having something amazing and then knowing it was gone forever. The horrible sadness.

In the years since, in a thousand books, we've learned of JFK's back problems, his drug issues because of them, his infidelities, his political conniving, his mob associations and a hundred other humanizing imperfections. But perception is sometimes the only reality one truly knows in this life and to a generation that was growing up with the daily underlying fear of possible nuclear annihilation, JFK and his Camelot presented us with hope. It was that hope that was his greatest legacy. It was that hope that got us to the Moon. After that, there were no problems we couldn't tackle.

Once again, though, time has passed, and as always, we tend to forget lessons learned. We spend hours and days every year speculating on the death of Kennedy and the death of the dream. In the end, who took Kennedy away from us shouldn't be more important than the fact that we had him in the first place! By not remembering his LIFE more than his death, it's US who have allowed the dream to die. 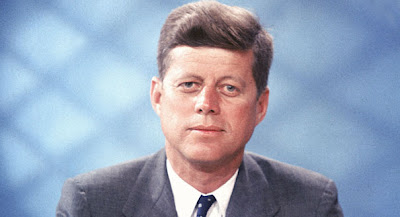