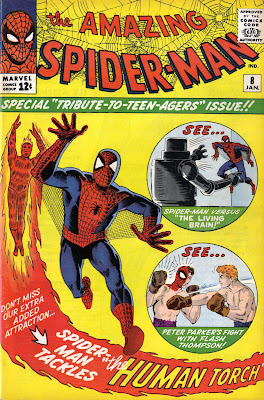 Steve Ditko turns 86 years old today and he is still making comics! Granted, they can be a little odd these days and more comparable to a Chick tract than to his classic period. His acolytes can be a little odd as well. Still, the one thing most everyone agrees on is that Steve Ditko was, is and always will be one of the greatest talents in the history of comic books. And no matter how much one may enjoy his work for Charlton or his Mr. A stories or his DC work or his Tower Comics period or his Warren stories...it always comes back to Spider-Man. 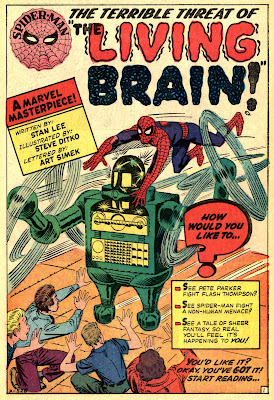 If Ditko had flat out retired at the end of his Spider-Man run, his place in history would have been assured. After a slow start, really, he was up to speed early on. I discovered Spidey two issues after Ditko left but thanks to the wonder of nickel back issues in the sixties, I quickly found this issue, # 8, at a place called Keith's Carry-Out. 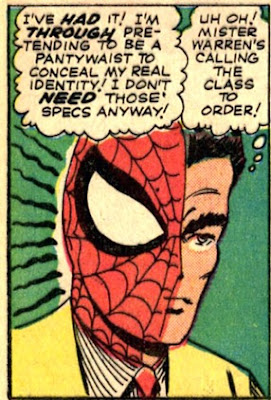 I was intrigued by the device of using the half image of Spider-man over Peter's face. It confused me at first but once I got it, I liked the sense of foreboding it offered.

And I don't care what anyone says, i still see actor Robert Walker, Jr. as Peter's inspiration. 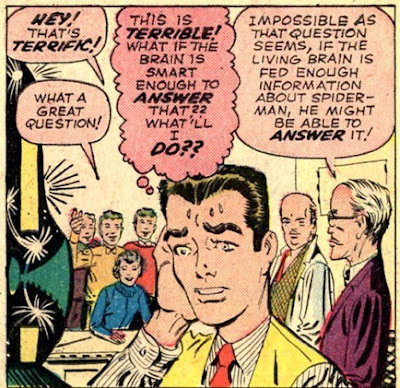 Look at the panel below. In and of itself, it's a throwaway gag. And yet the image has more personality and almost more impact than it should, thanks to Ditko. 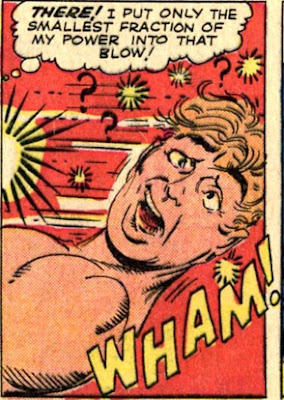 And the Brain--one of many unique antagonists for Spidey during the Ditko run. It's now known that Stainless Steve did all the heavy lifting almost from the beginning and his stories kept getting better and better. Toward the end, they began to look as though they might be veering into some uncharted territory as Ditko's objectivist philosophies began to rule his life.

While it would have been fascinating to see what might have been, I can't help but feel that Ditko left Spidey at the right time. His is a truly remarkable run, perhaps the single best run in comics! Better to go out on top. 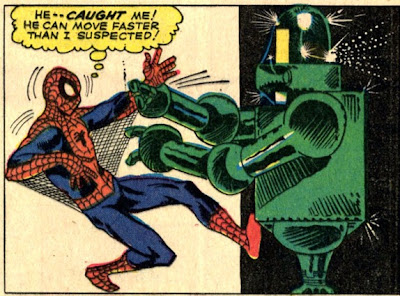