Dr Who Trivia In My Life 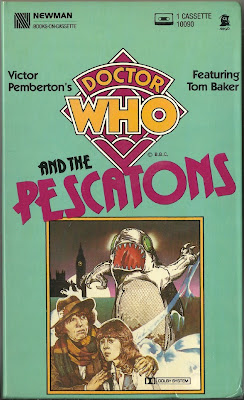 The first DR WHO book I ever read was GENESIS OF THE DALEKS. At the time, I had never seen a DR WHO episode.

Tom Baker was my first TV Doctor, starting with ROBOT circa 1979.

A friend of mine went to England in the early eighties and brought me back DR WHO mags about the NEW Doctor, Peter Davison. It would be months before we’d see him locally here in the US.

In the early eighties, I always insisted on the opening Saturday shift at work so I’d be home for DR WHO at 10 PM.

My future wife and I first looked twice at each other when I was showing her around the bookstore where we both worked and she went nuts over the DR WHO books as we passed them.

There was a DR WHO convention held in Cincinnati in the eighties with Louise Jameson as guest. I was going to it...but couldn’t find it! I took the bus into town and went to where I thought it was being held but it wasn’t. I wandered around other hotels for a while but no luck so I went home.

I first heard of the DR WHO TV series when FAMOUS MONSTERS magazine published a still of a monster from a Hartnell episode.

The first Doctor I ever saw was Peter Cushing in his 2 mid-sixties feature film adaptations, shown locally on CREATURE FEATURES circa 1970. I sat by the TV with my cassette recorder and audio taped the second one.

In 1996, when the TV movie aired, I was out of town for training for work and watched it sitting alone in my hotel room in Louisville, KY. Afterwards, I called my wife and we discussed it.

In the eighties, I mailordered from the UK a home-made copy of SLIPBACK, the Colin Baker radio version of DR WHO that aired during his series’ downtime.

When my bookstore started selling audio cassettes in 1984, one of the first we sold was, for some reason, DR WHO AND THE PESCATONS, a Tom Baker/Elisabeth Sladen children’s record from 1976. I still have my copy.
Posted by Booksteve at 7:37 AM