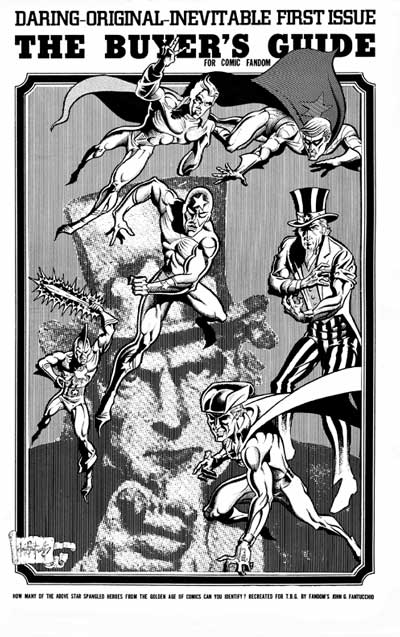 Those of you who read my seventies journal blogs will no doubt recall just how important THE BUYER'S GUIDE TO COMIC FANDOM (TBG) and later THE COMICS BUYER'S GUIDE (CBG) were to me over the years. Beginning with issue # 17 I subscribed faithfully for 25 years and continued to pick up issues from time to time ever since.

Today--on MY birthday, when I traditionally treated myself to a renewed subscription--CBG announced its impending demise. 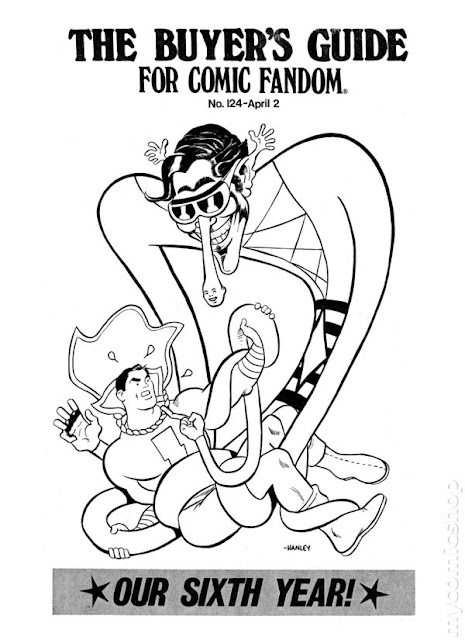 I was going to go into some depth as to the newspaper/magazine's history but here's a link to someone who does I better job than I could do:  http://blog.comichron.com/2013/01/end-of-era-comics-buyers-guide-1971-2013.html

The issue above was delivered the day my mother died. In those pre-Net days, it was the first I'd heard of Wally Wood's passing, even though it was a month beyond the actual date of death.

This was also where I became a fan of the writings of Tony Isabella, Mark Evanier and Peter David. I also enjoyed columns by Bob Ingersoll, Cat Yronwode, David Scroggy, Martin Greim, Shel Dorf and even Craig Yoe. Artists whose work I was first introduced to in the newspaper include Terry Beatty, Russ Maheras, Jim Engel and Alan Hanley.

Above it all, Don and Maggie Thompson and, before them, Alan Light and Murray Bishoff.
You guys meant the world to me at times when I sometimes felt all alone. Thanks to all of you for everything.
Posted by Booksteve at 5:50 PM