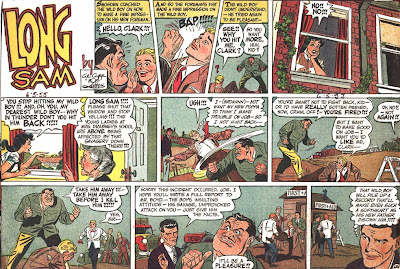 Here you see, courtesy of Steve Cottle of the I LOVE COMICS archive, three non-sequential mid-fifties Sundays from a comic strip I would love to see collected as, I know, would a lot of other people. I first heard of LONG SAM when I was a teenager and ran across an old suitcase in a storage area that my mother hadn't used in two decades , still packed from her last use. Along with old scarfs, a sweater and long atrophied makeup was a copy of a 1955 Sunday paper from North Carolina...and the one strip in it I had never heard of was LONG SAM. 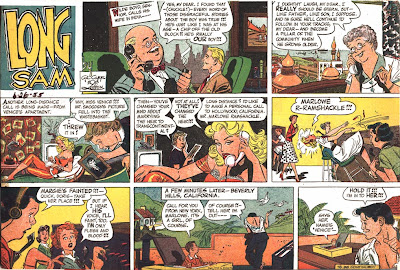 Created by Al Capp as a kind of distaff version of his already classic LI'L ABNER, it was quickly turned over to the cartoonist's brother Eliot Caplin. Art the whole time was provided by Bob Lubbers who, I found out later, had worked in comic books and had a run on the syndicated TARZAN strip as well. 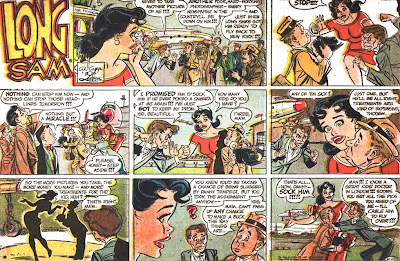 This is the Golden Age of comic book reprints. Somebody needs to reprint gems like this well-drawn and written strip!

Posted by Booksteve at 3:45 PM