Booksteve Reviews--Who's Afraid of the Song of the South? by Jim Korkis 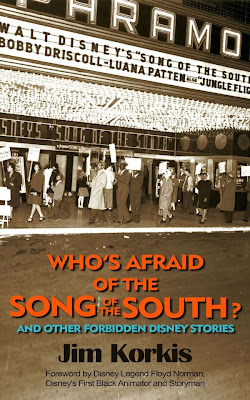 In the mid-nineties, I got hold of a copy of a Japanese release of Walt Disney's SONG OF THE SOUTH on VHS (with Japanese subs!). I had never seen it before and loved the animated parts very much! By that point, however, the film was locked away in Disney's vault, never to see the light of day again in the US (apparently). For the next week, I asked every black person I knew or who just happened to come in my store if they were familiar with the film and if it offended them. Honestly, most of them started singing songs from it and several insisted I had to make them copies (which I did). Not a one was offended and many were quite upset when I informed them Disney said they should be!

Now comes WHO'S AFRAID OF THE SONG OF THE SOUTH? by premier Disney historian Jim Korkis. This recent volume, one of a couple on the subject, details every aspect of the film from its original inspirations through its early protests (Which I had not been aware of previously), the exploitation of the characters in comics, several successful film re-releases and the eventual burial of the picture itself. All of this follows an enlightened and enlightening foreword by Disney's legendary first black animator, Floyd Norman.

It's a convoluted tale at best and one of the odder ones in Disney history for any number of reasons but Korkis is the one to streamline it. Arguably the best Disney historian of them all, having been so both officially and unofficially for decades now, he knows where the bodies are buried...or in this case frozen...or contrary to persistent rumor, not. 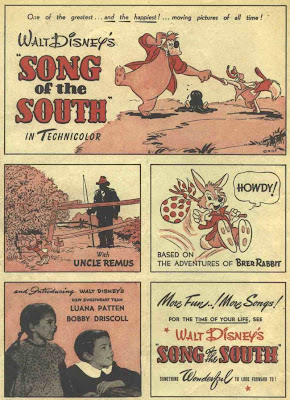 Jim categorizes all of the different aspects of SONG OF THE SOUTH into separate chapters, giving the reader easy to digest doses of how the individual aspects all fit into the larger image. The one missing puzzle piece seems consistently to be how current Disney management continues to turn a deaf ear to calls for releasing it on Blu-Ray and DVD in the US under ANY circumstances...in spite of legal releases in quite a few other countries.

If you notice the cover, though, this book has a subtitle--"...And Other Forbidden Disney Stories."

The SONG OF THE SOUTH issue fills the first half of the volume while the second half sheds bright light on another dozen or so mostly fun and fascinating Disney rumors, legends and factoids.

Among the items covered here are the story behind Wally Wood's dirty Disney poster (of which I many years ago purchased Jim's own framed black light mini-version).

All in all, if you're a Disney fan of any depth whatsoever, WHO'S AFRAID OF THE SONG OF THE SOUTH? needs to be in your library as soon as possible. Of course, that could and has been said of every other Jim Korkis book. Remember that name and buy any book he puts out that has anything to do with animation or Disney. Booksteve says!

Thanks to Jim and his publicist for a review copy. You can get your own copy at the link below: