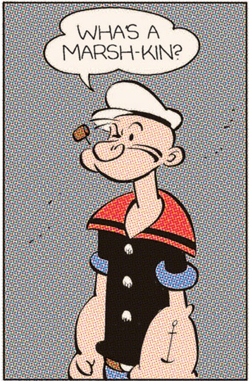 It's been five decades since the Topps company unleashed the immediately notorious MARS ATTACKS trading cards on the unsuspecting youth of America. Both inspired by and designed in part by the great sci-fi artist Wallace Wood, the cards were reportedly banned in some areas for their violence and became, in my area at least, an underground sensation shared proudly by those kids who had even one.

For Popeye, it's been a lot longer. The ugly, one-eyed, spinach-chomping sailor has been around now for more than eight decades, conquering just about every medium in which he ever appeared be it newspapers, comic books, cartoons or feature fil...hmmm...okay, well maybe that feature film was a bit of a misfire. 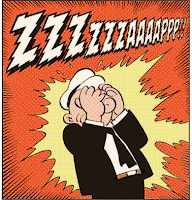 BUT...the unlikely combination of MARS ATTACKS POPEYE, part of IDW's current MARS ATTACKS...series and, in a way, also part of their revived POPEYE series, edited by Clizia Cussoni and Craig Yoe, is happily NOT a misfire in any way!

The cover is big and dark and splashy and flashy--what's needed to sell a comic book these days, I suppose. But it's the inside that won me over. Writer Martin Powell, himself always an indicator of quality, has written an excitingly paced story that perfectly captures the spirit of the Bud Sagendorf POPEYE comic books of the fifties. Every player from J. Wellington Wimpy to O. G. Wottasnozzle is exactly in character and all are allowed to expound in their time-honored, unique "voices," completely recognizable to anyone who's ever read a POPEYE story or seen a Fleischer cartoon.

The Martians, too, are recognizable from their feature film of some years back, given more personality than one might think considering their lack of actual dialogue.

There's also some cool Silver Age DC-looking Martian-guided robots and Alice the Goon in her underwear! What more could one want from a fun comic book?

The art is what makes it work overall. My friend Terry Beatty, whom I've known for decades to be a brilliant art mimic, combines that trick with his own honed artistic layouts to almost magical effect. At once channeling both Sagendorf's humor comic books and creator Segar's original adventure strips, Terry gives all the players at the Thimble Theatre just the right amount of stage time and his socko (literally in some cases) action scenes are true show-stoppers. At the same time, his Martians look as though they stepped right off the Topps cards.

Even the lettering is done in imitation of the classic POPEYE strips! 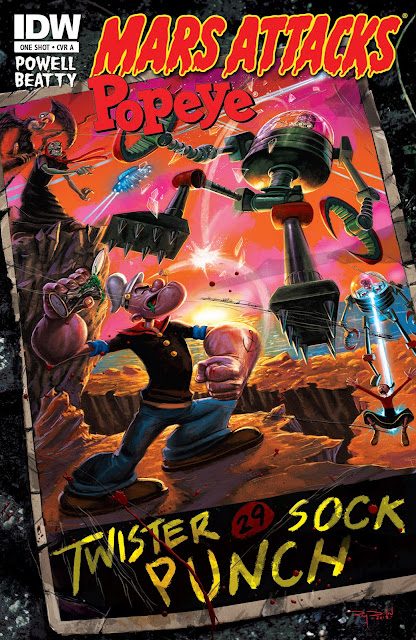 A good story, some great dialogue and genuinely funny lines, boundless nostalgic appeal, but an exciting comic even for anyone unfamiliar with the franchises. This is a FUN comic book. Period. Gives me faith that perhaps the modern day comic book market isn't quite dead yet after all.

Go. Buy it. I've read where it's selling out in some areas. MARS ATTACKS POPEYE!